Well here we are another year gone.  Happy New Year   and all that- Welcome to 2014. I’ve been a member of the YMCA for over 20 years and every January it never fails. It’s more crowded than ever.I’m pretty sure it’s like this at just about every gym and fitness center in the country. I think it starts with the Thanksgiving Turkey the mashed potatoes and gravy. The pumpkin and pecan pies. What! it’s Christmas already!  Gotta get me some Christmas cookies and in your best Homer Simpson voice MMMMMMMMMMMMM! Caaaaaandy!!! Choooocolate…

Next thing you know it’s New Years day everyone is making New Years resolutions.You know the drill quit smoking, Get in shape ( and we don’t mean round) Lose weight.

300 Pounds are Gone Thanks to Weight Watchers

Newlyweds Rose and Mike considered themselves obese, and it was true. At 276 pounds Rose knew she was beyond overweight. She often times avoided activities that included climbing up stairs, walking far distances, and even standing for long periods of time. Tying her shoes every morning became a challenge. Rose, just 26 years old, new something had to change.

Rose of Our Lady of Second Helpings partnered with her husband, Mike as they joined Weight Watchers together. As Rose would say, “we took to the program like water”. Both Rose and Mike attended the weekly meetings and followed the program to a tee. Because Mike and Rose worked in front of a computer all day long, they found the Weight Watchers eTools to be very helpful and convenient for logging their meals.

eTools allows you to track your food and physical activity anywhere you are, shop smart, and cook great food. Research has shown that Weight Watchers meetings attendees who use eTools lose 50% more weight than those who don’t. eTools is available only to Weight Watchers members who attend meetings. To attend a meeting you need a Monthly Pass. Save 30% on your Monthly Pass at WeightLossTriumph. 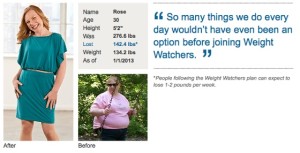 Being newlyweds, both Rose and Mike were surprised when just six months into the program Rose found out she was expecting their first child. Because of the pregnancy, Rose stopped counting points or weighing in at meetings, however she did maintain a healthy lifestyle. Mike still continued on his Weight Watchers journey through the pregnancy and Rose cheered him on. After giving birth, Rose rejoined the Weight Watchers program eager to meet her weight loss goals.

Together Rose and Mike love to eat out. To make sure they stayed on track with their daily points allowance, they choose to eat similar, smaller portioned breakfasts and lunches leaving them more points to use at dinner. In the past, Rose would come home from work, eat dinner, and plop herself on the couch in front of the TV for the night. As she began losing more and more weight she developed an increase in energy. Now she takes the time to do the things she loves while being active. Rose and Mike both enjoy gardening together.

Developing a Taste for Healthier Foods

One of the greatest transformations through this program was not just their outer shell, but also their taste pallet. Over time, both Mike and Rose began to enjoy the food they ate in a new, better way. Instead of the heavy, fatty, sugary sauces they used to crave, they now enjoyed healthy and natural ingredients like beets, sunchokes, and Brussels sprouts. Food they never would have guessed they would enjoy so much.

Together both Rose and Mike have lost a combined total of over 300 pounds with the Weight Watchers program. Rose now weighting only 134 pounds. “Having your husband as your weight loss partner is huge”, admits Rose. Though some would say that three and a half years is a long time to meet your weight loss goals, Rose believes that because she took the journey one step at a time she knows the weight will never come back.

Today both Rose and Mike continue living their healthy lifestyle and working to keep the weight off. Now, both thinner and lighter, they enjoy running and playing with their toddler and doing things they could never do when they were obese. Rose began blogging about her personal weight loss success in an effort to help others. Rose and Mike no longer allow weight to hold them back from living life to its fullest.

The Best Books On Healthy Nutrition

Bash and Lucy Fetch Jealousy By Lisa and Michael Cohn