An Interview with Jim Krusoe 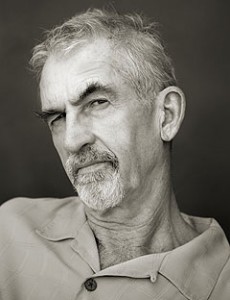 An Interview With Jim Krusoe by Christina Zawadiwsky

Jim Krusoe is an American novelist, poet, and short story writer. His stories and poems have appeared in Antioch Review, Denver Quarterly, BOMB, Iowa Review, Field, North American Review, American Poetry Review, and Santa Monica Review, which he founded in 1988. His essays and book reviews have appeared in Manoa, the Los Angeles Times Book Review, and the Washington Post. He is a recipient of fellowships from the National Endowment of the Arts and the Lila Wallace Reader’s Digest Fund. He teaches at Santa Monica College and in the graduate writing program at Antioch University, Los Angeles. His novel, Iceland, was selected by the Los Angeles Times and the Austin Chronicle as one of the ten best fiction books of 2002, and it was on the Washington Post list of notable fiction for the same year. His novel Girl Factory was published in 2008 by Tin House Books followed by Erased, which was published in 2009, and Toward You published in 2011, also by Tin House Books.

1. Why do your characters even attempt to communicate with the dead – that is, with what is already past?

Doesn’t everyone? Actually Toward You began as an exploration of how a person, having committed a wrong, could move his life forward. Along the way it turned itself into the last of three novels that examine the line between life and death. In the first, Girl Factory, the question is, can the past be fixed? In the second, Erased, it’s where the line is between life and death, anyway. In Toward You, there’s an additional twist, which is how the dead communicate with us.

2. How did you choose the “girls” in Girl Factory?

Originally I had a whole lot of girls suspended in acidophilus. They were meant to represent the sorts of idealized images men ogle in magazines and on television, but after a few drafts, I realized that if I lost a few women the narrative could move along more quickly and the point would still be made. So I tried to chose a sample (one from every race) that would make it clear they were abstractions of an idea, rather than living characters.

3. Are your protagonists primarily loners? And if you think that they are – why?

4. Many of your characters are doing “typical” things with their bodies and in their lives, while having highly unusual thoughts – do you think this is true of most people?

I don’t presume to know about others (see above answer) but I have been surprised in the past by what people have to say. I worked in a hospital for a while when I was young, and know for sure that most people have deep pain in their lives they often don’t reveal to others. Everyone I ever saw die turned out to be incredibly brave.

5. When you write, do you first plan out the plot?

I never begin with plot, but a situation. Then I write for a while and, at some point–usually at what I guess is the middle–I start to ask myself what I’m really writing about, what it is I want to discover through the ending. Then, when I’ve answered that, I re-ask the same question from a reader’s point of view, and rewrite the novel to attempt to answer it.

6. In your opinion, what is death?

Re-engaging the planet on a molecular level–to throw the cards back onto the table to be reshuffled and played by others.

7. In the future, will any of your books have a main female protagonist?

I doubt it. In part this is because I don’t want to presume that I know a woman’s mind, in part because it’s my own deficiencies that I write from. On the other hand, I already have, in a way. I began the early drafts of Erased with a male, wasn’t happy and changed him to a woman. After a while, I switched him back. In the process of losing his gender for a few go-rounds, I found that when I returned to the guy, he was richer for his time as a woman, more complex, less brittle. If you’ll notice, in Erased the whole city of Cleveland has practically been turned into a club (actually several clubs) for women.

8. Why do your characters want to bring the dead back to life?

I don’t know. Maybe they are trying to bring themselves back to life.

9. In your writing, do you “take” from your daily life experiences?

I often pluck small facts and details from daily life (I had an uncle, like Bob in Toward You, who was an upholsterer), but it’s my own obsessions and questions that drive the books.

10. Your characters are so obviously unique, but they seem very real and familiar to us – when you’re writing, do they seem like real people to you? And how do you conjure them up?

My characters are real to me, so I’m happy they seem real to you. In many ways the protagonist of my first novel, Iceland, was based on a psychotic friend of mine, who, after he read the book, mailed it back to me torn into pieces. Talk about a character fighting with a writer! (He later changed his mind.) But all of them come from the deficiencies in my own character, because it’s not the things I understand that interest me, but the things I’m puzzled by. My characters represent various incarnations of my id left to roam, and that may be why, no matter all the trouble they cause, I’m fond of them. On the other hand, measured by the population as a whole, my characters do seem to spend an unusual amount of time in prison.

Christina Zawadiwsky is Ukrainian-American, born in New York City, has a degree in Fine Arts, and is a poet, artist, journalist and TV producer.

She has received a National Endowment for the Arts Award, two Wisconsin Arts Boards Awards, a Co-Ordinating Council of Literary Magazines Writers Award, and an Art Futures Award, among other honors. She was the originator and producer of Where The Waters Meet, a local TV series created to facilitate the voices of artists of all genres in the media, for which she won two national and twenty local awards, including a Commitment to Community Television Award. She is also a contributing editor to the annual Pushcart Prize Anthology, the recipient of an Outstanding Achievement Award from the Wisconsin Library Association, and has published four books of poetry. She currently reviews movies for and , music for , and books for .