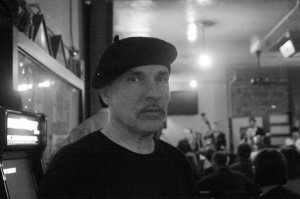 Philip “Philo” Kassner is the author of a book of photographic essays, Kochanski’s Concertina Beer Hall – The Return Of Rockabilly, that is available on Amazon.com. The accompanying photo was taken at the concertina hall by his wife Colleen Kassner. Here is an interview by Christina Zawadiwsky about his book:

1. Why did you decide to do a photographic essay on Rockabilly music, and why do you like Rockabilly?

Many years ago I listened to such music and found it haunting. When I had the first opportunity to visit Kochanski’s not only did I love the music, as a photographer I realized I had hit the “motherload”. I can give no rational reason for feeling compelled to photographically capture the magic. I simply had to do it. The wonderful music is still echoing in my head.

2. Is it difficult to take interesting photographs of people?

People are so wonderful and varied that I do not consider it difficult photographing them. There are countless opportunities. Any difficulty would simply be that of remaining incognito.

3. Do you regret your decision not to use a flash at Kochanski’s Concertina Hall? Could anything else have been done, other than conversion to black and white?

Since 1970 when I began to use high-speed film, I have always been fascinated with low-level ambient lighting. I do not in any way regret foregoing a flash. It would have changed the mood of the images I was capturing and not given a true view of the “scene”. At the end of the evening I was often thanked by the performers for photographing them without disrupting the mood.

Had I spent considerable time with the images using photographic software, I perhaps could have gotten a few more usable color images. In general I do not believe in more than a smidgen of photographic enhancement. Due to the low-level lighting conditions the photographs looked so much better when simply converted to black and white. I was pleased that they had the appearance of 35mm “Tri-X” film.

4. How and when did you first start doing photography?

In 1955, for my 6th birthday, my parents awarded me with a Kodak “box” camera. I still recall my father teaching me how to load film and use the camera. It was quite straightforward, there was nothing to adjust.

My photographic career started in 1966 however, when my father taught me how to use the more complicated 35mm camera he was given by his brother. I borrowed it when I took a trip to New York. By 1970 I owned my own 35mm camera and began to take a serious approach to photography. I was in the US Army stationed in Europe and had the use of the darkroom on base. Under the tutelage of David Firth, an accomplished photographer and fellow soldier, I was introduced to photographic composition and darkroom technique. Forty years later I am approaching the capabilities he had then.

5. Do you feel that photography is viable as an art form (since many argue that it’s representational and not a matter of interpretation)?

Photography is no doubt a form of art. It simply isolates “what is art” from the jumble of our surroundings.

6. How much of an element does chance play in your work?

Almost 100% chance. I rarely plan anything. The only decisions I generally make are simply where I am going.

7. Do you ever “stage” your photographs?

I do not stage my photography. My tendencies are to “shoot” things the way they are. I have been known to make a rare exception . I once saw my cousin standing next to a “droopy headed” sunflower. I asked him simply to lower his head. He had no idea why I had asked him to do so, but when he saw the result he laughed when he realized he and the flower were standing with similar poses.

My favorite photographers and artists are the wealth of people I know personally. There are too many to name here.

9. Do you prefer the old-fashioned darkroom photography or digital photography?

I am completely “sold” on digital photography. In a single day I can produce dozens of images. The darkroom, to me, was mostly drudgery.

10. Are you often surprised at the outcome of your digital work?

Always. Many of my best photos were pure accidents.

11. What is your favorite photographic subject?

An interview with Karen McQuestion