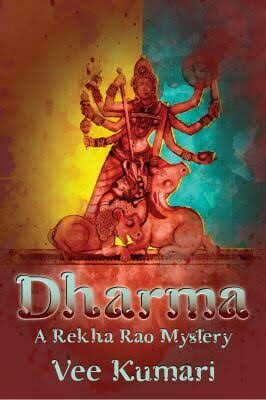 ty-something Indian American professor of art history, is disillusioned by academia and haunted by the murder of her father. S

he believes police convicted the wrong person, and moves away from her match-making family.

As she tries to manage her PTSD and heal her broken heart from a previously abusive boyfriend, she gets entangled in a second murder, that of her mentor and father figure.

Rekha is attracted to the handsome detective Al Newton, who is investigating the murder, but steers clear of him because of her distaste for cops and fear of a new relationship. The two constantly clash, starting a love-hate relationship. Meanwhile, her family is busy setting her up to meet a suitor, an Indian attorney. When police arrest one of her students and accuse her mentor of theft, Rekha is left with no other choice but to look for the killer on her own.

1.Is there a message/theme in your novel that you want readers to grasp?

Yes. My protagonist takes a chance at solving a crime and “grows up”. I love the relationship between her and her brother. My grandson who read the book says the brother is the comic relief.

2.What was one of the most surprising things you learned in creating your books?

One of the most surprising things to me is that I could finish a 300-page book. I have always been persistent and devoted to fulfilling my responsibilities, but I doubted it would translate into finishing my first book

3.What was your greatest challenge in writing this book?

Persistence. I gave up on it for months and months but always came back to it because I believed there was a good story in it to tell.

4.How did you come up with characters’ names and/or the title–the process, and the significance behind them, whether they are meaningful in any way, etc.

Rekha is an Indian film actress, noted for her versatility and acknowledged as one of the finest artists in Indian cinema, who has acted in more than 190 Bollywood films in her career spanning over 50 years. She has often played strong female characters, often ”the other woman”. I chose the name because I wanted something exceptional, not commonly used for Indian protagonists.

The meaning of the name, as Rekha explains to Al toward the end of the novel, is: ‘’a straight line”. It implies honesty, lack of filters, perhaps stubborn and inflexible.

The pronunciation of the name is a little tricky. The ‘R’ is not a harsh trilled sound, rather a softer sound best produced by having the tip of the tongue tap once against the front half of the palate, but not touching the teeth. But I’d be happy whichever way the readers choose to say it!

5.If your book was turned into a movie who would you like to play the main characters?

I haven’t thought about it much. Rekha would be an Indian American actress, but difficult to cast. I would play her grandmother, and an actor I know, Meera Simhan,

6.What do you think makes a good story?

Vee Kumari is a Professor Emeritus (a fancy word for ‘retired’) of the UC Davis Medical Center and USC Keck School of Medicine. Since her retirement in 2012, she has pursued writing and acting as careers.

“Dharma” is her debut novel, inspired by her love of the mystery genre and based on her observations of the Indian immigrant and Indian American lives in the US.

How to Carry Your Key of Knowledge