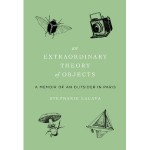 “But men should not be too curious in analyzing and condemning any means which nature devises to save them from themselves, whether it be coins, old books, curiosities, butterflies or fossils” is a quote by Mark Rutherford at the beginning of Stephanie LaCava’s memoirs of a special year in her life. Stephanie thought she was strange: “Born with red hair to parents without it, I always thought I was a changeling,” she writes in her introduction, and she “hated loud music and chaotic places.” She “imagined there was nowhere on earth where I could feel settled,” and when she was twelve her family moved from New York City to Paris where “I would never be quite American and by virtue of my birthplace, never truly French either.”

Stephanie’s father, who was often gone for weeks at a time while travelling in connection with his work, understands Stephanie’s penchant for curious objects and takes her to the French National History Museum where they see a “taxidermy parade” that includes a “real” stuffed Dodo bird. The French girls at school decide that Stephanie doesn’t belong and “They made me feel as if I had done something wrong, and they spoke badly about me to each other.” Stephanie and her mother and brother go to Euro Disney to celebrate American Thanksgiving and Stephanie’s mother grows lilies-of-the-valley for her to help her fight depression as Stephanie isolates herself in her room where she reads Greek myths, imagining her classmates as Gods and Goddesses.

real-life companions. In studying objects Stephanie learned “that if we are patient and gentle in observing ourselves and others, we will find connection.” From poison arrow tree frogs to Dali’s mustache (and her father’s), from mummy powder to whale teeth, from skeleton keys to red-capped mushrooms to the invention of sweaters, LaCava waves away mystery by filling us with knowledge. The objects that held the most meaning for Stephanie

at age twelve to thirteen become historical facts for us. We are also entertained with accounts of unusual people like the Marchesa Luisa Casati, from Milan, who “grew up to establish herself as an auburn-haired, green-eyed, live-snake-wearing eccentric who walked her big cats through the streets of Venice and arrived at the Ritz with her boas and cheetahs in tow” and Oscar Wilde, who “wore a green scarab ring on his left finger signifying happiness” and one on his right hand to “symbolize sadness.”

Actually a poignant coming-of-age story, Stephanie’s identifications with the oddities of life convey her attempts to merge with the extraordinary, despite her “growing insecurity” in a foreign land. She wanders away to a nearby park in the middle of the night (never considering that her mother might wake and find her gone), and goes on to try to buy candied violets at a shop in the early morning because she’s never tried them before.

Poetic and disturbing (as only a pre-teen-aged girl on the brink of discovering sexuality and love can be), and unexpected and surprising at every turn, this is one of the most memorable (and amazingly different) memoirs I have ever read (especially for someone who has always loved autobiographies). Trying to be “beautiful, stylish, and independent,” Stephanie wears nude slips with ragged green cardigans, tells us about Kurt Cobain and his “rejection of being the voice of a fringe generation,” and is a self-proclaimed and self-critical “skinny elf” who comes to love fashion as she describes her introversion and her “loves” (boys on whom she has crushes). The book intrigued me and drew me in completely and I highly recommend it to anyone who loves to read about the history of everyday (and not-so-everyday) objects like daytime pajamas, relics, glass eyes, tea bags, kaleidoscopes and all sorts of curious items! Matthew Nelson’s illustrations add greatly to the reader’s enjoyment of this book.

Also find out what happened to Stephanie, who dedicates An Extraordinary Theory Of Objects “To those who unwittingly taught me about wonder in the world, to not be afraid of the dark, and to talk to strangers.”

An Extraordinary Theory Of Objects – A Memoir Of An Outsider In Paris – by Stephanie LaCava, published by Harper on 12/4/12, 224 pages.