Amazing Adventures of a Nobody book review 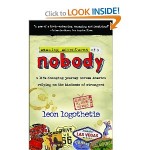 “‘I don’t have a bad life,’ I told myself again and again…..’I should be happy, right? I have a home, a job, more money than I need, a dad and mum and brothers who care about me, even if they don’t readily share such feelings….’ But sometimes none of it felt real; it felt, I suppose, like it wasn’t even really my life.
I hadn’t built it, hadn’t fought for it, hadn’t erected a real, true life for myself from the elements of passion and longing. I was lonely, yes, but not just for friends or lovers. Honestly, I was lonely for me.” Having an epiphany after viewing the film The Motorcycle Diaries (about Che Guevara), Brit Leon Logothetis decides to leave England and all of the trappings of his own life for a trek across America (with a TV film crew following him and with only $5 a day in his pocket). He starts at Times Square in New York City and endeavors to end at the Hollywood sign in Los Angeles. In-between he reinvents himself.

“Journeys towards the center of one’s being are not vacations,” writes Leon, as he is initially rejected by strangers when he asks for help. He is startled when a New York street pimp, Don, approaches him with his partner Dominica and wants to know his story, and Don tells Leon that he has to make people notice him. In Newark, New Jersey, which Leon dubs The Republic Of Melancholy, a priest challenges him to a wrestling match which he loses, but a generous woman buys him a ticket to Philadelphia. “We are not separated from others, we only pretend to be,” Leon learns. “When we offer help to others, we are really helping ourselves.”

In the City Of Brotherly Love Leon is denied free lodging at a youth hostel, sees Rocky’s statue “raising his hands in perpetual triumph,” and a young man named Derek lets him stay on his couch until he goes to work in the morning, in the meantime showing Leon about the World of Warcraft on a computer. And all this happens in just the first few days of his trip, with memories of his childhood besieging him at every turn.

A woman named Cinammon (or Karen or Barbara – she changes names constantly) who believes that the CIA is trying to kill her adds a colorful touch to Leon’s adventure as “an example of the messiness of life, and how within this messiness arrives a beauty that sometimes appears when two souls touch” because “we are so alone and so afraid, so lonely in our own space, that we will use any excuse we can find to crash into each other in search of that spark
of connection.” Leon visits a fraternity house in Charlottesville where he streaks naked across campus in exchange for beer, lodging and a ticket to Charleston; is given a ride by a girl named Ashley to Lexington, Kentucky; is asked by his Greek mother to come home because he’s ill with incipient diabetes; is driven by a former prison guard named Chris to Indianapolis; meets Rick, a man with a ragged family who doesn’t know how to read whom Leon directs to a free clinic for his dislocated shoulder; is asked by a drug dealer if he wants to buy a rock; and, in general, becomes more and more involved with people as he continues to “surf the country on a wave of generosity.”

From Chicago to Galesburg to Denver, from Albuquerque to Las Vegas to Los Angeles, Leon experiences rapping, tomahawk throwing, a balloon festival, a barbeque, a woman searching for virgins for a sacrifice, blood on a hotel room door where there’d been a murder the week before, classic cars and more while “searching out the lost connection between people.” He muses about his father – “how far he had traveled from his father’s world, and how far I had come from his,” and he finally decides that “living a great life is about giving back to others.” A must read

for anyone who’s wondered about the tradition of traveling alone across the country seeking life experiences (which used to be done in America by sneaking onto freight trains), or anyone who has longed for the surprise of what’s beyond his own comfortable hamlet or even his own front door.

Amazing Adventures Of A Nobody by Leon Logothetis, published by Bettie Youngs Books on October 15, 2011, 268 pages.