Across the Aisle an Author Interview with Stephanie Vance 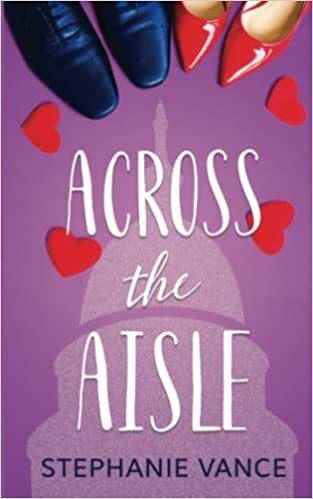 Novelist and DC insider Stephanie Vance says that despite the partisanship, DC can generate as much heat and romance as any European hotspot, including across party lines. She writes about it in her debut romantic comedy, Across the Aisle. 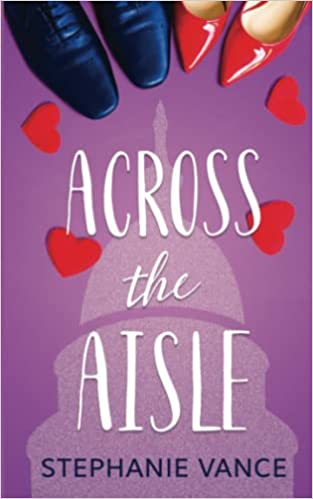 Vance shares insight from the inspiration of her book, to who would play the lead roles of Dallas and Grant in a movie and who she’d most like to invite to a dinner party in this delightfully entertaining profile.

What was an early experience where you learned that language had power?

When I was five years old, my father gave me a copy of D’Aulaires Book of Greek Myths. I remember being entranced by the stories. People turning into animals. Enchanted musical instruments. Magic hats and shoes. People dying and coming back. I guess it was kind of like early Harry Potter! It wasn’t until later that I realized I had been learning things as I read. King Midas taught me that you should be careful what you wish for. Icarus taught me that flying too close to the sun before you’re ready is a really bad idea. Athena taught me that women could be smart, gorgeous, bad-ass warriors. In short, words have the power to teach, even when we don’t know we’re learning.

What inspired the idea for your book?

In part, it’s my way of trying to improve DC’s image, both in terms of the political environment and the outside world’s perspectives of the people who live here. Having lived in DC for thirty-plus years, I know it’s not as terrible as people think. Like Dallas and Grant, most of us came here to make the world a better place—it’s just that our definitions of “a better place” are different. Plus, it’s an amazing city that offers so much more than just acrimony! We have free museums, Michelin star restaurants, speakeasys, top-notch shopping, dinner cruises, jazz clubs—the list goes on and on. It’s as much a love story about DC as it is about Dallas and Grant.

What would you say is your most interesting writing quirk?

As I’m writing my first draft, I’ll sometimes set my font to “wing dings” so I can’t read the words emerging on the page. Once I’m done, I turn it back to a regular font. It’s a great way to not self-edit as I’m getting that first draft down. And if hanging out in bars while writing counts as “interesting,” I’ll throw that out there as well.

What is the most difficult part of your artistic process?

I think all writers suffer from “lack of ‘BIC’ (Butt-In-Chair) syndrome.” Once I sit down and get the laptop open, I’ll write for hours. There’s something about the task of starting that’s daunting. I think it’s because writers (or at least this writer) have a hard time with putting that crappy first draft down on paper. We want our prose to be elegant and charming from the start. It’s not. So, we find excuses not to write. My house is usually at its cleanest when I’m supposed to be writing.

What comes first for you — the plot or the characters — and why?

That’s a difficult question to answer, because it’s a “chicken and egg” kind of thing for me. In Across the Aisle, I had a vague plot idea—two opposing lobbyists must compromise in both policy and love. Dallas and Grant, though, were already in my mind because I’ve lived in this scene for so long.

How do you select the names of your characters?

Dallas McGrath came to me out-of-the-blue. If her name stemmed from an experience or interaction with someone in the “real world,” it’s buried deep in my subconscious. Grant Pierce also “popped up.” In forming his character, I ran through potential names that occurred to me spontaneously in alphabetical order. “Aaron”? No, he didn’t feel like an Aaron. “Brian”? Nope. When I got to “G”—there he was. Grant. For a couple characters, though, I did do some digging. Grant’s friend Oshuna, for example, is a striking, sensual, beautiful Black woman with roots in Ethiopia. I dug around in various African myths and found her there as Oshun. I added the “a” at the end to give it a more feminine flair.

Does one of the main characters hold a special place in your heart? If so, why?

I have a huge crush on Grant (don’t tell my husband). He’s gorgeous and rakish with a deep-down sweetness he tries to hide. He likes jazz. He wants to save the world. He’s self-deprecating and charming. Who wouldn’t love him?

How did publishing your first fiction book change your process of writing?

Instead of agonizing over every word, I really leaned into the “first drafts are terrible” idea. I learned to write out the initial take on the story quickly and then put it away for a few weeks. That’s a much better use of time than trying to get it all right from the start. Plus, when I returned to it, the draft often wasn’t as bad as I thought. My writing mentors would often say that “you don’t write, you rewrite.” In fact, Across the Aisle went through at least four drafts before it was published.

If you could tell your younger writing self-anything, what would it be?

Critiques from fellow writers aren’t personal and they don’t mean you’re a terrible writer. Whenever I received feedback, I used to withdraw into the fetal position with a bottle of wine and decide I’d never write again. Once I became brave enough to look at their feedback, I saw the immense value. Don’t get me wrong, after some brutal critiques I still curl up with a bottle of wine—but after a day or so I delve into the process of incorporating their feedback into my work.

Oh, and try not to read bad reviews. The scathing ones are sometimes personal, and those readers do think you’re a terrible writer. Remember that those reviews tend to center more on a reader’s personal taste—they aren’t necessarily a commentary on you as a human being or writer.

What books or authors have most influenced your own writing?

It’s probably surprising to hear coming from a writer of romantic comedies, but my absolute favorite author is Douglas Adams. I’ve read Hitchhikers Guide to the Galaxy dozens of times, and still snort laugh at his dry wit. In the romance world, I’d have to say Jane Austen, as cliché as that is. Her commentary on British society is hysterical in its own way which many readers don’t see at first. If you don’t believe me, go read the initial description of Mr. Collins in Pride and Prejudice. The thread running through both (or even all) of my influences is self-deprecating dry wit. I even make fun of DC occasionally in Across the Aisle, despite (or maybe because of) my love for the city.

If you could choose three people to invite for a dinner party, who would they be and why?

If we’re talking currently living, then Alicia Keys, because she seems really nice, Simon Rich, a humorist who’s right up there with the best of them, and Ryan Gosling because, again…Ryan Gosling!

If your book were made into a movie, which actors would play your characters?

Funnily enough, I’ve already thought through some of that because I have a screenwriter attached to the project, so we talk about this occasionally. Of the main characters, we’d love Zoey Deutch to play Dallas, as she’s Dallas’s spitting image. For Grant Pierce, Jesse Metcalfe would be a great choice. Jesse has a full-on smoldering charm-thing going on that is very much in keeping with Grant’s character.

Stephanie Vance wears two hats: romantic comedy writer, and D.C. advocacy guru with a 30+ year career. The boutique firm she heads, Advocacy Associates, helps associations drive citizen-based approaches to achieving policy change and Stephanie’s career has inspired her fiction. Her debut novel, Across the Aisle, stars two young lobbyists with opposing views involved in a racy, high-stakes legislative battle. An extensive traveler and avid scuba diver, Stephanie has visited six continents and dived everywhere from Iceland to the Great Barrier Reef. She attended college on a music scholarship (flute) and holds 3 master’s degrees—which she’s pretty sure equals a Ph.D.  Her nonfiction book The Influence Game made the Washington Post bestseller list. She lives in D.C. with her husband.

Thomas the Rhymer; an Interview with author Paul Andruss