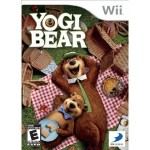 Timed with the December 17th theatrical release of the new movie Yogi Bear, the Yogi Bear Wii game was released on December 7th by D3Publisher.

This family adventure game is Rated E for Everyone by ESRB.

The new game celebrates the one of the classics of the Hannah-Barbara cartoon collection as features by Warner Bros.

About Yogi Bear for Wii

Enter your email to WIN Kinect for XBOX 360

We Are Excited to Offer One Reader a chance to win the Yogi Bear Wii Game!

To Enter: Add a comment and tell us why you want to win!

Leave Separate Entry For Each

Comment on any current review and tell me which one here.