Who Pooped in Central Park? Scat and Tracks for Kids 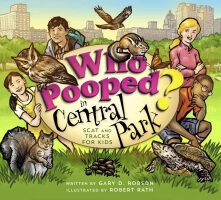 Now the Title of this book alone is going to make most kids at least want to open it up and take a look.Who Pooped in Central Park?

is actually one in a series of twenty, yes twenty POOP Books! lets see we have a list here somewhere…

I absolutely love this entire series not only does it get kids interested with the silly title and great illustrations there is so much more. I think every elementary school in the country should have this series available to kids. At least one in the series. 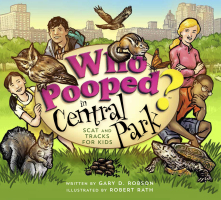 What makes these books so cool is that they’re pack so full of fun facts.(no alternative facts here) In the Central Park book we have a group of school children touring Central Park in NYC of course. As they tour the park they begin to notice the different kinds of POOP throughout the park.With the help of a few adults along the way they learn of the different types of animals that make the park their home. How to identify them by their POOP or Scat which they learn if the term that the science community uses.

Not only are the kids learning all about the animals but the book also explores Central Park itself. So as you look at the whole series it explores the different National Parks in the U.S. The reader learns of the contrast between all the parks and their different locations and environments in the country . We learn all about  the animals that you might find roaming around. The illustrator Robert Rath has done a great job with his colorful pictures bringing the book to life.

So now take a chance and Join four inquisitive  kids as they discover the surprising variety of wildlife that lives in New York City’s premier park. The animals themselves are sometimes hard to find, but their poop is everywhere! Follow Tony, Lily, Emma, and Jackson as they explore Central Park, investigating poop (scat) and footprints (tracks) and learning the habits and diets of squirrels, chipmunks, muskrats, birds, raccoons, bats, and more!

Author Gary Robson is not a new author his  two newest books, are “Gary’s Guide to Successful Book Signings” and “Who Pooped in Central Park?”
He has also published over 300 articles in various magazines, newspapers, and Web sites, ranging from “The National Law Journal” to “Blacklisted! 411” (a hacker magazine), and from “Newswaves For Deaf and Hard-of-Hearing People” to “VLSI Design” (a chip design magazine).

The Little Girl Who Lived In The Well: Book Review