I don’t usually question the title of a book. After all the book is the author’s creation and he/she can do whatever they want. But after reading Whiny Whiny Rhino I didn’t feel Tiny ( that’s the Rhino)was all that much of a whiner. Not even that much of a complainer really. Just one of those people(Rhino’s) that had an excuse for everything. OK that said let’s move on…

When Reading a children’s book I always look for that “moral” of the story. You know that underlying message or lesson that the book teaches.So as I’m reading Whiny Whiny Rhino I’m  reminded of one of the all time classic’s and one of my absolute favorite books ever written Green Eggs and Ham by the late great Dr. Seuss . Just as Green Eggs and Ham taught us to try new things,Whiny Whiny Rhino does the same.You see “Tiny” wants to go out and play but when  he does finally go out he has nothing but excuses when his friends want him to try new things. When he realizes he’s having no fun he starts to think a bit differently.

Again like Seuss the book is written in rhyme which I always felt is a great way to keep kids into a story and picture book. Being a picture book it has very colorful and silly pages to keep those kiddies entertained.This make a great book to read to your kids or for the young ones to read alone.

Now in no way am I comparing TEAM McBoop to Dr. Seuss but hey guys it’s a start! Who’s team McBoop you ask…

My dad is the idea man, mostly because he’s the one always griping. It
turns out gripes can make really good ideas.

After you’ve got an idea, I think the very best place to start work on
a project is with some bad drawings. I mean REALLY bad drawings. Walt 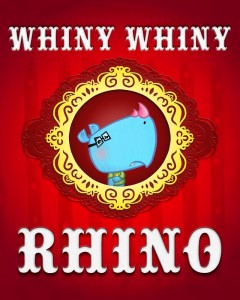 Stanchfield once said, “We all have 10,000 bad drawings in us. The
sooner we get them out the better.” Well, in our case, it was more
like 1,000,000 bad drawings. We’re still working on getting them all
out.

At the time that we started the book, I was living 800 miles away from
my dad, so we would go back and forth all day emailing each other our
terrible drawings of animals.  It was always a good time just
completely destroying each other’s work and also making fun of my father’s
technological challenges. This man is a doctor and a professor but
cannot for the life of him figure out how to get a drawing attachment
in an email.

Thankfully, it would inevitably happen that we’d finally draw
something “not completely, horribly awful.” Then we would begin to pick
out parts of our sketches that we liked and throw out the rest and
then we would re-draw.

Eventually, with a little patience and magic, we would have a slightly-not-awful
looking character. And so we’d re-draw again. And again and again and
again until we had something we both didn’t despise. Of course, it’s not
a perfect process. I mean, our rhino did end up with a
disproportionately gigantic head, and tyrannosaurus rex limbs that are practically
non-functional.

As for the words, writing out the story was fairly easy. It was the
rhyming that did us in. If I had a time machine, I’d go back in time
and punch whichever one of us decided making our story rhyme would be
a brilliant idea. We’d spend hours and hours talking on the phone
trying to figure out ways to make things rhyme.

Luckily, it always happened that whenever we stopped fixating on it
for a day or two, the words would eventually come.

Usually whenever we thought the story was just about done, we’d decide
we needed to add in just one more little thing, which inevitably
turned into a big thing, which then turned into a lot of big things
and also a lot of deleted things, and then suddenly the whole story
was garbage and we needed to rewrite it all and redraw every page in a
completely new style.

That happened only about ten times. But it always ended up for the better. So I would say to anyone writing a story – don’t be scared to make big changes when they need to be made.
Change is good…annoying, but good.