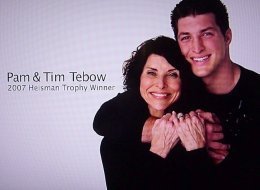 Tim Tebow’s Super Bowl ad has aired.    After much anticipation, the ads have now been released — and the Heisman winner tackles his mother!   They do not contain any overtly pro-life message and are tamer than many may have expected.   The ads mostly consist of Pam Tebow, Tim’s mother, talking about her son. The former Florida quarterback only speaks at the end of the commercials. Below is the transcript of the pre-game ad.

PAM TEBOW: I call him my miracle baby. He almost didn’t make it into this world. I remember so many times when I almost lost him. It was so hard. Well he’s all grown up now, and I still worry about his health. Everybody treats him like he’s different, but to me, he’s just my baby. He’s my Timmy, and I love him.

TIM TEBOW: Thanks mom. Love you too.

Read the Entire First Chapter of The Gargoyle by Andrew Davidson