The Rushing of the Brook by Kansas Bradbury 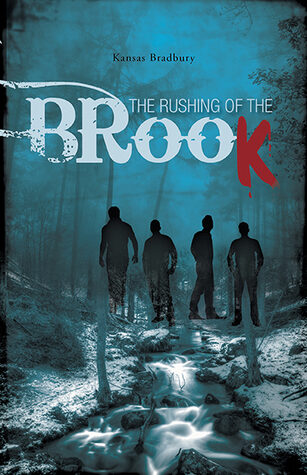 It’s 1987, and a dark shadow is about to fall upon the city of Sifton and its residents. Hayward Barry and his best friends—Joe, Davey, and Pete—are typical fifth- and sixth-grade boys, hanging out after school and getting into trouble. However, powerful urges and deep feelings have begun to grow in the boys as they approach young adulthood; for Hayward, this is his affection for Beth, a girl in his class who he fears will be swept away by another boy named Daniel. For Pete, it is a volatile temper and the desire to always get his way. When Davey is given something that Pete wants, it sets off a disastrous chain of events that strips them all of their childhood, drowning their innocence to the sound of a rushing brook—a sound none of them will forget.

As misery and happenstance would have it, the day tragedy strikes Hayward and his friends, a murderous monster awakes from hibernation in a town miles away. Getting into a stolen vehicle with bloody clothes and an unspeakable lust for violence, the nameless man drives towards Sifton, wreaking destruction and horror along the way. While his story won’t collide with the boys’ lives until seventeen years later—when they have all grown up—this man will reopen old wounds and awaken the trauma that has never healed. Hayward, now a failed artist and reluctant police officer, is left to pick up the pieces of a shattered community and solve the mystery of the event that has come to dominate his life.

One of the first things that interested me in this book was the split setting. One half is when the boys are young, and then we move into the future (17 years later, to be specific) to see how this has affected them later in life. I will admit, it is a bit of a shorter book, or maybe that’s just because of the different settings that it seems shorter.

If you’re a fan of suspense and murder and all that jazz, you’ll definitely want to pick this one up. Bradbury does a good job of fleshing out the characters and showing real change from their kid lives to their adult personas. He also contrasts the horror and suspense with family and friends and other relationships, which give the tale a grounding that some other stories in the same genre miss. It’s because we have the ability to connect to the characters in those moments that we can then go on to let ourselves believe in the other, more extreme circumstances.

I will admit, this isn’t usually the type of book I go after, but I was pleasantly surprised. I have read a few good mystery/horror types, and this one deserves a place beside them. It was slightly hard for me to get into the heads of the characters as they are quite different from myself, but Bradbury writes them in a way to still be relatable. Also, there is a bit of language, so keep that in mind if you’re thinking about letting younger readers take a crack at it.