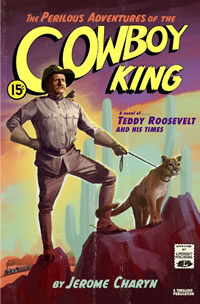 An Interview with Jerome Charyn author of

The Perilous Adventures of the Cowboy King:

A Novel of Teddy Roosevelt and His Times 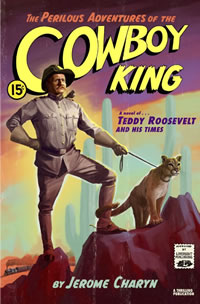 I fell in love with Teddy Roosevelt’s father, a philanthropist who devoted his life to the poor. And I wanted to write about his son.

It’s like riding a very perverse horse, you shove and shove until it gallops all on its own.

My favorite chapter is about Teddy Roosevelt’s mascot, a mountain lion he named Josephine, it’s a love story with a tragic end.

The first sentence of the Sound and the Fury: “Through the fence, between the curling flower spaces, I could see them hitting.”

Emily Dickinson is my favorite author; I’ve been influenced by Hemingway’s early stories, his novel The Sun Also Rises; Faulkner’s The Sound and the Fury; Bellow’s The Adventures of Augie March, Nabokov’s Lolita and Gabriel Garcia Marquez’s One Hundred Years of Solitude.

I finished a novel on J.D. Salinger’s early life as a counter-intelligence agent in WWII, and I hope to start a novel on Louise Brooks

The toughest criticism was my own: re-reading one of my books and discovering sentences that shamed me.

The best compliment was given to me by a student, many years after I was his teacher, who said, “I remember you every day of my life.”

You tend to hear from readers who are moved and touched by your books. Those who hate them generally stay away.

I’m always writing, even when I’m not writing.

“First there was a metallic aroma, the taste of tin in my mouth; then the monster would appear with rusty fingernails, his yellow eyes swaying like twin lanterns in the dark, his fierce red whiskers clotted with human blood.”

I wanted to be an artist, I had no talent, so I had to paint with words.

Read what you love and never stop reading.

Raising the literary bar to a new level, Jerome Charyn re-creates the voice of Teddy Roosevelt, the New York City police commissioner, Rough Rider, and soon- to-be twenty-sixth president through his derring-do adventures, effortlessly combining superhero dialogue with haunting pathos. Beginning with his sickly childhood and concluding with McKinley’s assassination, the novel positions Roosevelt as a “perfect bull in a china shop,” a fearless crime fighter and pioneering environmentalist who would grow up to be our greatest peacetime president.

With an operatic cast, including “Bamie,” his handicapped older sister; Eleanor, his gawky little niece; as well as the devoted Rough Riders, the novel memorably features the lovable mountain lion Josephine, who helped train Teddy Roosevelt for his “crowded hour,” the charge up San Juan Hill. Lauded by Jonathan Lethem for his “polymorphous imagination and crack comic timing,” Charyn has created a classic of historical fiction, confirming his place as “one of the most important writers in American literature” (Michael Chabon).
6 black and white illustrations

Jerome Charyn is an award-winning American author. With more than 50 published works, Charyn has earned a long-standing reputation as an inventive and prolific chronicler of real and imagined American life.

Pulitzer Prize-winning novelist Michael Chabon calls him “one of the most important writers in American literature.” New York Newsday hailed Charyn as “a contemporary American Balzac,” and the Los Angeles Times described him as “absolutely unique among American writers.”

2019 THE PERILOUS ADVENTURES OF THE COWBOY KING Blog Tour Schedule

Wednesday, January 16 – What Is That Book About

Thursday, January 24 – Your Books My Review

The Lost Heifetz and Other Stories: A Collection of Short Stories by Michael Tabor