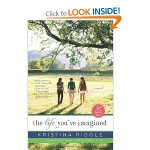 “Paint the color of dried blood has begun to peel. One front window shutter is missing and the other is leaning sideways as if trying to escape.” This is what Cami first sees as she goes back to her alcoholic father to spend time in her childhood home for the duration of a summer. After that it’s a fast-paced book with continuous action, almost like a soap opera (but much more realistic), told from the points of view of four women, Cami, her high school friend Anna (who’s also returned, from another state, for the summer), Amy, an “odd” one in high school who used to be overweight but has now slimmed down and is now going to marry Paul, and Maeve, Anna’s mother. Each chapter is numbered and bears the name of the woman recording her thoughts about what’s happening. And a LOT happens – mostly to women, and mostly to women who have been or are waiting for men, like Maeve (whose husband abandoned her twenty years ago but is trying to contact her again now) or those blessed with ambition, education, and a good job, like Maeve’s daughter Anna, who’s become a lawyer. Amy is waiting for Paul to reject her and Cami has lost her last boyfriend after excessive bouts of her own gambling, and she’s waiting to find out the secrets of her childhood (which, eventually, in this novel, she does).

It’s almost ironic that the emotion and action is all about women when the pivotal points of this story are men. Will Anna’s old high school sweetheart leave his wife for her? Will Maeve’s husband Robert (who has never technically divorced Maeve) arrive as Prince Charming with a new life for her? Will Paul discover that Amy can very quickly gain too much weight again (like her mother who doesn’t even try to lose weight) and call off the wedding? Will Cami learn secrets about her mother (who died long ago) from her exceedingly abusive father?

There are also other women who show up as eccentric characters – Aunt Sally, Robert’s sister, whom Maeve has always helped, and Agatha, who does seamstress work and is kind to the figures of large women by applying her talents to make them look attractive; Maddie, Paul’s child, who almost drowns, and so on. It’s a veritable whirlwind of women, wondering and planning, and then dealing with real life as it turns around and strikes them. Anna finally admits that “All my life I’ve known every single step I would take and I’ve always done it. For the first time in my life I think of my future and it’s a blank.” Paul leaves Anna a copy of Thoreau’s Walden with a marked passage: “……that if one advances confidently in the direction of his dreams, and endeavors to live the life which he has imagined, he will meet with a success unexpected in common hours,” after Amy, Anna and Cami had thought, in high school, that the quote had always been “Go confidently in the direction of your dreams. Live the life you’ve imagined,” which never worked for them (and of course, The Life You’ve Imagined is the title of this novel).

Kristina Riggle has been able to make all this frenetic activity and its subsequent emotions work by writing very short chapters and creating distinct characters with unique voices, which is true to life in that we’re often pitted together with friends and family who are so unlike us, so that we can immediately begin to learn about the world. The Life You’ve Imagined is never boring, which is a lot more than can be said for many novels of its kind, and there are no fairy tale solutions for most of its protagonists’ problems, which I find very true-to-life. An unusual read!

Christina Zawadiwsky is Ukrainian-American, born in New York City, has a degree in Fine Arts, and is a poet, artist, journalist and TV producer. She has received a National Endowment for the Arts Award, two Wisconsin Arts Boards Awards, a Co-Ordinating Council of Literary Magazines Writers Award, and an Art Futures Award, among other honors. She was the originator and producer of

Where The Waters Meet, a local TV series created to facilitate the voices of artists of all genres in the media, for which she won two national and twenty local awards, including a Commitment to Community Television Award. She is also a contributing editor to the annual Pushcart Prize Anthology, the recipient of an Outstanding Achievement Award from the Wisconsin Library Association, and has published four books of poetry. She currently reviews movies for , music for , and books for .