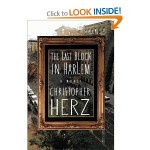 The Last Block in Harlem is “a love letter to his block,” where Christopher Herz was inspired as an adult in Sugar Hill, Harlem, USA. Both fluidly conversational and vividly descriptive, Herz tells the story of an unnamed narrator and protagonist and also brings to life (with a great talent for dialogue) the voices of all the people he meets in his beloved homeplace, as he “was always losing myself in the lives of others.” Our protagonist, in a “self-induced firing,” decides to cleanse himself by leaving an ad agency and walking up and down his block cleaning the trash from it while trying to become part of the community.

In the past, his neighbor Sukal Jennings says, “People had more sense, I suppose more love for each other. We was all in the life together. Now we just seem to be fighting for our little piece.” Later in the book the protagonist hears something similar, but in more ominious tones, when Councilman Macon, who wants to take credit for any good in the community so that he’ll rise politically, says, “Do you honestly believe anyone cares more about your movement than about their family?…..Don’t fool yourself into thinking people are not going to take the best deal for themselves and their people. That’s politics.”

But before all this our man is just trying to live, to conjoin himself with his wife Namuna in a beautiful and caring manner, despite the fact that “I had been helping advertising companies create jobs for so long they had become my reality.” Now he just tries to help, as “I think the first piece of trash that I picked up was the plastic wrapper from a pack of cigarettes. Second was a cookie package. Next a juice box. Then an empty can of soda. I couldn’t stop. I kept going, not conscious of anything above or below me, only the cleaning of the sidewalk under my feet.” And as he walks around New York City, he watches: “Inside Central Park there are people dying, men dropping down on one knee to propose, young couples enjoying the simplicity of a passionate kiss, old couples trying to find new paths to walk, single women glancing over the tops of the books they’re reading to see if anyone is worth escaping fiction for, joggers trying to tone their bodies enough to look good in a suit come Monday, and, of course, there was me – a man walking around, thinking if I could just clean up a little piece of nature, I might feel worthy to think of myself as a conqueror, like the statues found around every turn in the park.”

Our protagonist also collects stories, because “People came in and out of my life quickly. Entire pieces of them became stuck to me with each random story.” He talks, and listens to, the Jamaican woman in the laundromat; The Bartender at St. Nick’s pub; Armando, the janitor of his building; Rena Goldsmith, who claims trees and squirrels as her own; the man who sells chicken and rice from his car trunk; the owner of the bodega who plays music too loudly; The Boxer, who ended up in prison for many years; The Kid

who sells candy near Yankee Stadium and watches the sunrise; The Preacher whose wife is on too many meds and rides the subway trains all night; The Reporter, who’s young and trying to be an independent journalist, and so many more. And as one lady tells him, “Maybe we are all extensions of each other.”

Rich in making himself a part of the lives of others but innocent of the machinations of the political machine, our protagonist makes makes some mistakes in trying to help his block and comes to regret them. Later he regroups and starts another campaign (that would not serve to gentrify the area and force the people who already live there to move), but then he himself is struck by tragedy and becomes a part of the block’s tightly woven tapestry of history as he drinks daily and tries to escape what’s happened to him, concluding with a rash act that shows him to be tottering on the brink of sanity (as none of us knows what life will bring us).

Started as a love letter to his block, The Last Block Of Harlem becomes even more, imaging for us a plenitude of diverse characters trying to make their way through this world. Herz has brought us a huge heart into whose chambers we can peer and see the many compartments that make it pulse and continue to keep the body of society alive. A great book for both the young and the old, The Last Block In Harlem will surprise you and make you remember just how much we all need each other to survive.

The Last Block In Harlem, a novel by Christopher Herz, published by AmazonEncore on July 13, 2010, 224 pages.

Tags: The Last Block in Harlem

The Best Books On Healthy Nutrition

The Naughty List by Thomas Conway a different Santa Story