The Girl Who Fell From The Sky book review 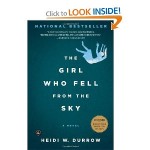 “At school everything about black history you learn in one month….the main ones are slavery and how Lincoln made the slaves free, how there were different water fountains, and about Martin Luther King Jr. There are black women in history too – Rosa Parks, Harriet Tubman, and Phillis Wheatley. I hear the stories different now though….Whatever those things had to do with each other, I learn now that they also had something to do with me.” So writes Rachel in The Girl Who Fell From The Sky, and Rachel is a little girl struggling with her identity, displaced to her grandmother’s (her father’s mother’s) house, where her grandmother is black while she is light-skinned, the product of the marriage of a black serviceman father and a Danish mother (as author Heidi W. Durrow is herself) with blue eyes. Rachel reads about Miss America: “Miss America is black today, and she has blue eyes. There is a small picture at the bottom of the newspaper’s front page. She doesn’t look black to me. Grandma picks up two newspapers to have one extra. She is happy that a black woman is the most beautiful woman in the world. And so is the grocery store cashier. It’s a new day, the grocery store cashier says. And I believe that I’m supposed to be happy about it.”

So where does Rachel stand in all this? Her background also includes alcoholism and addiction on the part of both her mother Nella and her father Roger, and a tragedy that befell the family (she also had brothers) that Rachel doesn’t entirely remember that happened before she came to live with her grandmother. Everything is different in this new place where skin color counts a lot, and few would believe that her mother was white. Her father too has disappeared, and Rachel longs to know what’s happened to him, hoping that someday he’ll return to her.

The Girl Who Fell From The Sky is told in different character voices, a different voice for each chapter. The book begins with many chapters in Rachel’s voice, and then there are some by Jaime, a boy who witnessed the tragedy and later talked to Rachel’s father, and some by LaRonne, Rachel’s family’s former landlady. Jaime turns into Brick as he runs away from home and takes on a false name, and then finally some chapters are voiced by Nella, Rachel’s mother, talking about the unrealities she was forced to encounter and how they made her feel unreal too. Meanwhile, bit by bit, Rachel grows up, as “then Anthony Miller kisses me on the lips. The kiss runs all the way down to my middle. He kisses my hurt ear next, not knowing that it is hurt, and strokes my hair along my back. Anthony Miller makes me a princess. ‘All of this is secret,’ he says, and I listen. ‘Because I really have another girl.'”

By the time wanderlust and fate bring Jaime – now Brick – to Rachel accidentally, she has matured. “I hang out with Jesse and Brian at lunch and sometimes after work, we talk about the

people who walk through Pioneer Courthouse Square or real things: like what’s happening in the world, or books, or things like that.” And because of Brick, Nella’s secret, her state of mind and what happened long ago is revealed to us through Rachel, as she finally recalls that day of destiny: “My mother is my mother and she still is……There was just that one time, that one day she couldn’t protect me – not from the hurt and not from the words.” The book appropriately ends with wishes – wishes for the future and wishes for the past.

The Girl Who Fell From The Sky is set in the 1980s and is strengthened by the fact that the author herself is on a continuous quest of self-discovery, as we all should be. Rachel is a very real little girl in this book, confused by where she has been randomly flung and wondering why people’s lives take the courses that they do. Despite some mistakes and the absence of her parents she finally finds herself on the brink of her own adulthood and her own passions, despite the sorrows of the past. The winner of the Bellwether Prize For Fiction, The Girl Who Fell From The Sky is an enriching reading experience for both young and old alike.

Read My Lips by Teri Brown