The Artsy Girl – in Bronze by T.A.Pack Interview with the Author and Giveaway 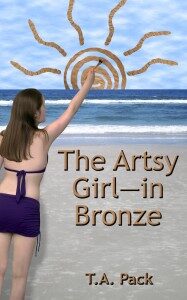 An Interview with Mr. T.A. Pack Author of The Artsy Girl – In Bronze

Bookroomreviews :First Mr. T.A.Pack I’d like to know what the T.A. stand for?

Thomas Allen. I identify strongly with my initials because, growing up, my nickname was never Tom or Tommy; it was Tap. Many members of my family still call me that.

Bookroomreviews : The blurb about the book says Kayla was put in charge of a group of class clowns, misfits, and troublemakers – So, which one were you?

I always wanted to be the class clown, but in reality I probably was more of a misfit.

Bookroomreviews : I see you are a fan of Dr.Seuss. Me too. What’s your favorite book by Seuss? Why?

Oh, The Places You’ll Go!is profound in its simplicity, which is why it’s a favorite gift for students graduating from high school or college. Sales spike every spring. But I was in my 20s when that book was published. When I was a young child, my parents read to me often, and they usually read such Dr. Seuss books asGreen Eggs and Ham and One Fish, Two fish, Red Fish Blue Fish. I firmly believe that those books instilled a love of language in me — especially a love of alliteration and rhythmic language.

Bookroomreviews :Your favorite Seuss character? Why?

When I was in college, I was in a band called Many Mumbling Mice, an allusion to the mice in Dr. Seuss’s ABC: An Amazing Alphabet Book. (“Many mumbling mice are making midnight music in the moonlight … mighty nice.”)

Bookroomreviews : What advice would you have to a High school student hoping to write a book someday.

Practice, practice, practice. Practice writing like a pianist practices piano. You need to know that it can be extremely difficult to make a living as a writer, but if you write often and well, you’ll be able to take advantage of any opportunities that come along. For instance, in the late 90s I was writing articles for a magazine about the Internet. The editor recommended me to a publisher who was looking for someone to write Internet books, and I ended up writing two nonfiction books for Que, an imprint of Macmillan. (Of course, the Internet has changed quite a bit since then, and those books are now woefully out of date.)

Bookroomreviews : Did you pull from any personal school experiences when writing this book?

The plot to The Artsy Girl–in Bronze is made up out of thin air, but the main character is sort of an amalgamation of many of the artsy students I’ve interviewed in my job as a writer for Louisville, Kentucky’s public school system.

Bookroomreviews : When the reader closes your book after reading it what would you like them to think about it?

The novel is a coming-of-age story, and, on one level, it’s about finding out who you are and deciding what kind of person you want to be, but my main goal was simply to write a fun and funny novel.

Bookroomreviews : Any sequels in the mix?

Bookroomreviews : Besides sequels do you have anything else coming along?

I’m a semi-professional drummer and drum teacher, and I’m working on a method book for drummers. (The main character in my novel falls in love with a drummer. Coincidence? No comment.)

About THE ARTSY GIRL – IN BRONZE

A burned-out teacher puts Kayla Carmichael, a naturally gifted art student, in charge of a group of class clowns, misfits, and troublemakers who are painting a mural on the back of Sandpiper Public High in Daytona Beach, Florida. Can Kayla help her classmates become artists—or at least get them to stop playing games on their cell phones? Kayla also has to deal with possibly insane heavy metal musicians, a gift shop manager who acts as if he’s running a Fortune 500 company, a guy with a vivid violet voice, and an already wealthy teen tennis player who’s about to go pro. Meanwhile, Kayla hopes to get wealthy herself by selling T-shirts she designed. She tries to decide if a manipulated photo she took with a stolen camera is worthy of a national award. And she wonders why she wants to hear—and see—that violet voice more and more.

T.A. Pack’s short stories have been published in several literary journals, including The Sonora Review, Thinker Magazine, The Louisville Review, and LEO (Louisville Eccentric Observer). THE ARTSY GIRL – IN BRONZE is his first novel. He’s a writer and editor in the Communications Department at Jefferson County Public Schools in Louisville, Kentucky. The school district has more than 100,000 students, and Thomas has written nonfiction articles about many of them, including dozens of artsy students. He and his wife have two teen daughters. His mother, as well as his sister and her family, live in the Daytona Beach area, which is the setting for his novel.

T.A. loves to hear from his fans and hope you will follow him on the following social media:

Excerpt from THE ARTSY GIRL-IN BRONZE by T.A. Pack

When she was seven, Kayla went to a birthday party for Brenda Scroggins, a girl in her class at Dolphin Spray Elementary. A lot of Brenda’s classmates called her Bossy Brenda because she always had to have her way and had to be the center of attention even when it wasn’t her birthday.

At the party, almost everything she said started with It’s my special day ….

“It’s my special day, so I get to open my presents right away—and I get to pick the party hat you’re going to wear.”

“It’s my special day, so we’re going to play with my guinea pig now. He doesn’t bite hard.”

“It’s my special day, so we’re going to watch The Little Mermaid. I’m going to sing all the songs and fast forward through the other parts.”

It wasn’t even the kind of sauce Kayla liked. She liked thick topping with big chunks of strawberry in it, but Bossy Brenda made everyone soak their ice cream with a runny, blood red sauce from a plastic bottle.

When Kayla tried to squirt it on her ice cream— right when she squeezed—the bottle slipped sideways. She sprayed a big spot of red on the plastic tablecloth, and the other girls laughed. Kayla slumped down in her chair so far that her eyes were level with her plate.

“Don’t worry about that, honey,” Brenda’s mom said. “I’ll clean it up later.” Then she went into the kitchen where everybody’s mom except Kayla’s was drinking coffee.

As soon as Mrs. Scroggins left the room, Brenda started telling her guests what was wrong with their birthday presents.

She already had a bazillion stuffed dolphins, she told Jennifer.

And she didn’t like board games with spinners because they made her dizzy, she told Jill.

And speaking of board games, Sandy knew good and well that Brenda had wanted Trouble
for her birthday, not Sorry. She’d wanted Trouble because she liked that plastic bubble in the middle. She liked making the popping sound.

Sandy, who lived next door and was Brenda’s best friend until that exact moment, didn’t like being lumped in with and lectured to in front of the other girls, and she angrily reminded Brenda that it was Sorry—not Trouble—that they’d played until almost eleven o’clock at her house. She was positively sure it was Sorry because she’d had to help Brenda read the cards and Trouble doesn’t have any cards.

And she was absolutely positively sure it was Sorry because Brenda had said, “They should call this game Not Sorry,” and she’d laughed and shouted “Not sorry!” every time she got to do something mean to one of Sandy’s game pieces.

Kayla hated arguments. They were full of scary fireworks—bursts of red and yellow that covered her field of vision. The colors weren’t ugly, but they were too bright and changed too fast, which gave her a headache and made her feel wobbly. To distract herself from Sandy and Brenda’s argument, Kayla used her plastic spork to doodle in the straw- berry sauce she’d squirted on the table.

Sandy was one hundred percent absolutely positively sure that Brenda had said Sorry was the most fun game she’d ever played, and Sandy had been excited about giving it to her, but now, on her birthday, Brenda certainly was not acting like a nice little girl like her mom was always telling her to do. In fact, Brenda was acting like a little butthead.

To celebrate the blog tour of THE ARTSY GIRL-IN BRONZE, T.A. Pack will be giving away a $50.00 Amazon Gift Card to one grand prize winner, a $25.00 Gift Card to Amazon to the second runner up and an ecopy of THE ARTSY GIRL-IN BRONZE to the third runner up. Please check out each blog and enter the giveaway every day for more chances to win. All entries must be received by September 22nd before midnight.