The Artist Of Disappearance book review 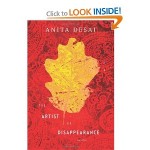 The Artist Of Disappearance contains three novellas. The first, The Museum of Final Journeys, is about stasis, everything remaining the same to the point of destruction; the second, Translator Translated, is about one person becoming another in an attempt to pursue fame. And the third, The Artist Of Disappearance, is about a man’s flight to the wilderness in order to finally find sanctuary and freedom. Each is unique and a world onto itself, as Anita Desai’s sensitive nature examines the realms of human experience.

The Jorges Luis Borges quote at the beginning of the book – “One thing alone does not exist – oblivion” – says it all. Whatever we are experiencing, it is rich in detail, whether our life stories are pathetic, jubilant, abundant, restrictive, poetic, mundane, in servitude or free.

These are unique stories in that they unfold as life does, slowly and unpredictably. Anita Desai guides us along the way, but we never know what we’re about to encounter.

At the beginning of The Museum of Final Journeys our protagonist tells us “I did not want to stay in this desolate place, I wanted to run after the jeep, throw myself in and return to a familiar scene. I was used to city life, to the cacophony of traffic, the clamour and din and discordance of human voices, the pushing and shoving of humanity, all that was absent here.” He (throughout the story we never learn his name, he is just “I”) is a trainee, “a mere subdivisional officer in the august government service” come to this land of “slow motion” with mush food, mosquitoes, electricity turned on at night to reveal huge insects and himself “in a remote outpost” with a jungle surrounding his isolated house. He goes to court, “a crumbling structure of red brick that stood in a field where cattle grazed and washermen spread their washing, and there I sat at a desk on a slightly raised platform to hear the cases brought before me. They had chiefly to do with disputes over property.” Soon “the routine of my working life became oppressive,” with only occasional visitors, other officers on tours of duty, until he too wants to go on a tour to escape the boredom. Finally one day a “clerk/curator” comes to see him, “an elderly, rather bowed man with wisps of white hair showing under his white cap….dressed in a faded black cloth coat and close white trousers, perhaps the outfit he had adopted as a clerk….”. Having served a family estate for fifty years, the curator (“like a mosquito that has got under one’s net and can’t be driven out, the ancient gnome went on murmuring”) tells him a family history and hints of a remaining “museum” of gifts from abroad that he is still curating. Our protagonist decides to visit the “museum”, upon the behest of the curator, who says “The only way open to me to keep it intact is to request the government, the sarkar, take it over and maintain it.” But what our hero finds there is not what he expected at all.

In Translator Translated, Prema, who is well-educated but who was never popular or recognized as a schoolgirl, meets Tara, once a schoolgirl leader and socialite who later was “so much mentioned in the media” for her journalistic work and contributions to international magazines. Tara, who now is establishing an independent press, amazingly recognizes Prema at a Founder’s Day function at their old school and talks to her about Miss Dutt, “the dragon.” Later “a providential act took place.” Prema drops a book written in Oriya, the childhood language of her mother, in which Tara takes interest as she tells Prema that she wants to “branch into translations now, and publish writers well-known in their own regions but unknown outside.” Seizing her opportunity to become known (and wanting to escape her life as a teacher of Western literature), Prema decides to translate the stories of Suvarna Devi, who helps her husband in his clinic practices in the wilderness. Tara accepts Prema’s proposal, and Prema forges ahead in the translations (having once wanted to have been a writer herself).

At a conference where the translated book is exhibited, Prema finally meets Suvarna Devi, and she is not at all what Prema expected. Neither is the reception to her translation at a press conference where Prema is questioned about her motives of translating “these stories into a colonial language that was responsible for destroying the original language.” But Tara supports her, and soon Prema is translating Suvarna Devi’s new novel – but with literary disapproval on her part. What occurs later, and what Prema has become, is the crux of this novella, as Prema finds out “We are all in this together, this world of loss and defeat. All of us, every one of us, has had a moment when a window opened, when we caught a glimpse of the open sunlit world beyond, but all of us….have had that window close…” However Suvarna Devi remains who she is, starting “a primary school for tribal children. She was always so interested in their education.”

The Artist of Disappearance is about Ravi, a boy adopted by rich parents who leave him at home, where they feel he “belongs,” while they travel abroad. Basically raised by a servant, Hari Singh, and educated by Mr. Benjamin, who speaks “good English,” Ravi longs for the outdoors. “Outdoors was freedom. Outdoors was the life to which he chose to belong – the life of crickets singing out of the trees, the birds wheeling hundreds of feet below in the valley or soaring above the mountains, and the animals invisible in the undergrowth, giving themselves away by an occasional rustle or eruption of cries or flurried calls; plants following their own green compulsions and purposes, almost imperceptibly, and the roads and stars, seemingly inert but mysteriously part of the constant change and movement of the earth.” But when his parents are home and having parties, Ravi is often confined to sitting still in a chair for hours, moving his feet and waiting to be fed.

Later Ravi grows up, goes to Bombay (where the rest of the family sees him as “backward”), takes management courses and works in the family business, where he feels like a prisoner. Returning to Mussoorie after his mother’s death and because of a strange fire that occurs there, Ravi is set free to make the wilderness his own, until a film crew disrupts his hermitage.

There is much suspense in Anita Desai’s novellas as each builds infinitesimally slowly, teaching us life’s learned wisdoms while each intricate story unfolds. Using a very unusual form of writing not generally seen today, Anita Desai writes with the insights and true meanings of a poet about both the upswings and disappointments of our lives. An excellent work of literature, I recommend The Artist Of Disappearance very highly.

The Artist Of Disappearance by Anita Desai, published by Houghton Mifflin Harcourt on December 6, 2011, 176 pages.

Christina Zawadiwsky is Ukrainian-American, born in New York City, has a degree in Fine Arts, and is a poet, artist, journalist and TV producer. She has received a National Endowment for the Arts Award, two Wisconsin Arts Boards Awards, a Co-Ordinating Council of Literary Magazines Writers Award, and an Art Futures Award, among other honors. She was the originator and producer of Where The Waters Meet, a local TV series created to facilitate the voices of artists of all genres in the media, for which she won two national and twenty local awards, including a Commitment to Community Television Award.

She is also a contributing editor to the annual Pushcart Prize Anthology, the recipient of an Outstanding Achievement Award from the Wisconsin Library Association, and has published four books of poetry. She currently reviews movies for , music for , and books for http://www.bookroomreviews.com.