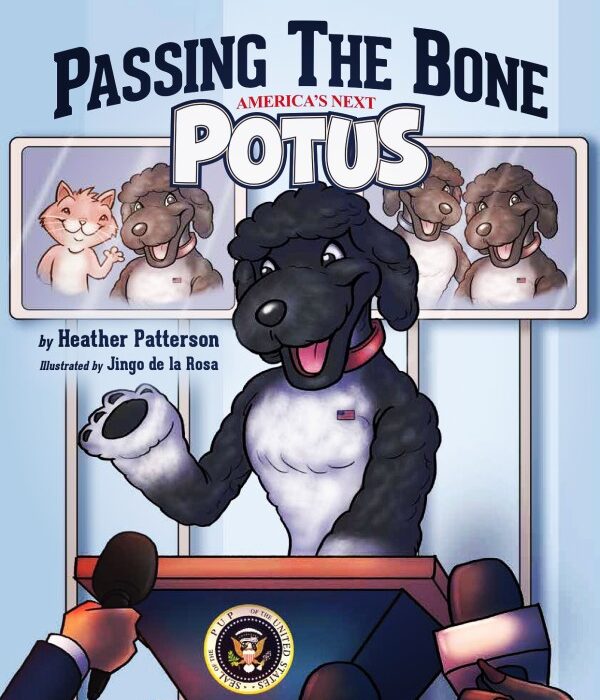 Well , unless you live under a rock and have no idea what’s going on in the world you know that the U. S. Presidential primary season is coming to a close.As scary and disappointing those primary’s have been as I always say “It Is What It Is”. Yes in deed it’s once again time for one POTUS to leave office and another to move into the White House. 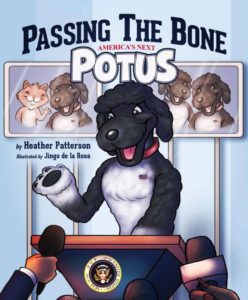 Which brings us to the introduction of an adorable new book by Heather Patterson. Heather is a Kindergarten Teacher that has written this creative,witty and just adorable book .Her goal of course is to get children to take an interest or at least learn a little bit about how this whole process works.

As most everyone knows from movies and tv POTUS is of course President of the United States. Ah but we have a twist here In Ms. Patterson’s Version POTUS is PUP of the United States. Yes I said PUP as in puppy. Although our POTUS is not really a puppy any more. After almost eight years in the White House you cant exactly call him a puppy. But  DOTUS would just be silly.

Passing The Bone America’s Next POTUS  is all about Bo Obama as he prepares to leave office. What a cute and clever way to teach kids about what goes on at 1600 Pennsylvanian Avenue. The illustrations were done by Jingo De La Rosa and add so much to the book. Any child is going to love this book if only for the pictures. But it is the story that will capture their imaginations. Also this is actually a “real” book Hardcover and everything. Now I don’t know how we got so lucky here but we actually have an interview with POTUS himself…

Bo, what does “POTUS” Stand For?

How long do you get to live in the White House?

Well, the presidents get elected every four years. If a president is re-elected, he and his family live in the White House for eight

Who qualifies to be the next POTUS (Pup of the United States)?

What advice do you have for dogs wishing to live in the White House?

The First Pup needs to have excellent behavior, be patriotic at all times, show respect and honor to the military, and represent our nation with pride! The Pup of the United States is a leader-the leading house pet of this great nation. It will be wise to have friendly relationships with many house pets across the country-that includes cats!

Bo, what can be learned from Passing the Bone?

Readers of all ages can learn new facts! Excerpts in Passing the Bone were taken from true events. For example, I have appeared as a guest on two popular talk shows, Jimmy Fallon and Ellen DeGeneres. Upon visiting the White House, British Prime Minister David Cameron graciously gifted me with a bone wrapped in red, white, and blue ribbon (what a treat!). Facts are hidden in the illustrations as well. You’ll find all five of America’s living presidents, along with some former first dogs inside the pages. You’ll also learn the dos and don’ts of America’s First Pup, along with the office and responsibilities of the president!

Will you miss living at 1600 Pennsylvania Avenue?

I will miss living in the White House very much! It’s the greatest home in the country! I get to be surrounded by the leaders of this great nation, making the best decisions they can for America. I will miss sitting in on meetings, giving my approval with a tail wag or disapproval with a bark (I helped out the President a lot, you know.) I will miss napping in the Lincoln Room, delicious meals from the White House Chef and treats from the White House Bakery. Thankfully the staff loves me, so I have been told they will occasionally mail me treats from time to time…

What will your life look like after the White House?

Life after the White House will be very different, but I look forward to time with the First Family. I look forward to backyard runs, mud splashing, and playing fetch at the doggy park alongside my fellow citizens.

What do you have to say to the next Pup of the United States?

It’s an honor to live in the White House, be the president’s pup and represent the United States of America! Hold your head high and put on paw in front of the other with a smile. Always be thankful that you get the high privilege of being a leader for the greatest country in the world!

Passing The Bone can be found on Amazon

Now let’s hear from the Author…

What makes “Passing the Bone: America’s Next POTUS” unique?

“Passing the Bone: America’s Next POTUS” is written for children about the office and responsibility of the president and presidential pup, 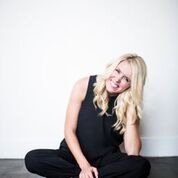 from the first dog’s perspective. In a political year, children have a book that engages them in current events, captures them with humor, and teaches patriotic facts while they get an inside look at the White House pup.

Why did you want to write a book during the election season?

I wanted to write a book during the election season specifically for children. Any presidential election is historic and an educational opportunity! While the nation is consumed with campaign trails, election coverage, and political predictions, “Passing the Bone” includes children by engaging them at their level and appealing to their interests.

Is “Passing the Bone: America’s Next POTUS” only for children?

Readers of all ages can learn new facts from the book! A few excerpts in “Passing the Bone” were taken from true events. For example, Bo appeared as a guest on two popular talk shows, Jimmy Fallon and Ellen DeGeneres. Upon visiting the White House, British Prime Minister David Cameron graciously gifted Bo with a bone wrapped in red, white, and blue ribbon. Facts are hidden in the illustrations as well! You’ll find all five of America’s living presidents, along with former first dogs, inside the pages.

How can children get excited about the Presidential election?

The key to exciting children about a presidential election is teaching them they have an important role in our nation! Children are young, but they are capable of being good citizens. Their character, passions, interests, and the way they treat others matter. American children also have the privilege of being born in a free country, where one day they can vote and take part in electing a president! And of course, they can get excited about the new White House pup that will be moving into 1600 Pennsylvania Avenue.

When did you start writing this book? When did you start writing in general?
I first began writing in 2013, about former presidents George W. Bush and his father, George H. W. Bush. I started writing “Passing the Bone: America’s Next POTUS” in September 2014. I actually had writers block from my Bush manuscript (now completed) and needed a break. I decided to clear my mind by writing something light and humorous. I opened a separate blank document and the words started to flow…

What are your future writing plans?
I am currently seeking a literary agent for my Bush manuscript.  Not only is a father and son presidency unique, but George H. W. Bush is a true American hero whose story hasn’t been widely shared with children. At the time of his military service, he was the youngest pilot in history to fly in the Navy! He served in World War II, survived a plane crash, was rescued at sea, became CIA director, and eventually, president of the United States. I believe children should learn and read of President H. W. Bush’s heroism and service to our country.

How has being a kindergarten teacher helped you write a children’s book?
As a kindergarten teacher, I read multiple picture books to my class every day. Having that background experience has given me an inside perspective to what children find engaging, funny, interesting, or flat. Envisioning my students sitting on our class reading carpet helped mold my story as I wrote and made revisions.

Is Bo’s character in the book influenced by a dog you know?
Well, of course! My twin sister’s goldendoodle, Beau, is very humorous and has quite the personality. Beau was kicked out of obedience school as a puppy, swallowed a sock which put him in the animal ER, would give up on his exercise walks and have to be carried home, and even kept a secret stash of M&Ms, matches, nails, and socks under the couch. (How he got all those items remains a mystery!) Beau is extremely personable, playful, and loving. I think readers will enjoy his personality shown through the book

.Passing The Bone can be found on Amazon

I’m Going to Give You a Bear Hug!