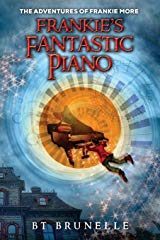 By B. T. Brunelle

Parents who want their kids to be avid readers will be quite happy for Frankie’s Fantastic Piano. It’s fun. It’s a genuine page-turner. It builds vocabulary. An ordinary young boy becomes a real hero under the kinds of circumstances we love to shiver over.
Three-time Las Vegas Headliner of the Year Frankie Moreno is the inspiration for both volumes of The Adventures of Frankie More. Ms. Brunelle has co-authored 100 songs with Moreno over 21 years. When Brunelle was ready to move into fiction, her protagonist had to be a piano-playing boy named Frankie. 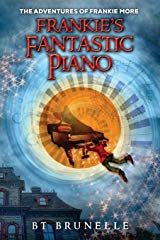 Frankie Moreno was a child prodigy on the piano in his native Santa Cruz, is a prodigious songwriter and performer, so loved where he’s given thousands of performances that three days are officially Frankie Moreno Days in Las Vegas. He’s played Carnegie Hall with the New York Philharmonic, and recorded duets with violinist, Joshua Bell.
Particularly appropriate for grades 4 and up, Frankie’s Fantastic Piano puts Mozart and a living, enchanted piano together with time travel, dastardly pirates, 18th Century English ballrooms and a world-wide fundraiser at the Civic Auditorium to benefit hospitals and schools in the 21st Century! Evil characters perish, generally due to their own ignorance and greed. Heroes survive grave threats to their lives. There are lots of dialogue and character development, signs of high quality books for young people.
A glance at the Table of Contents reveals how much action and excitement our hero encounters. At The Haunted Mansion Frankie More meets a living piano that will become his friend and savior when two very bad guys threaten his life. “Grave Danger,” “The Red Death,””Abandon Ship,” and “The Dark Discovery” allude to challenges that Frankie faces in the 18th Century — before his Fantastic Piano transports him back to this time. The piano takes Frankie to 1765 London because it is there that he will find and save a great concert pianist. A pirate ship, an evil captain, several young, musical friends whose father Frankie rescues, are parts of the high action. In the midst of all these momentous events, Frankie gets to hear a young Mozart in person, figuring the piano could have been invented just for the master composer.
There’s more to the Frankie books than imagination and excitement. Jon Brunelle, the author’s husband and collaborator declares, “The books have magic in them. Magic and music can be hooked together easily. Music is magical in itself.
“The books evoke compassion,” continues Brunelle. “Frankie doesn’t hesitate to save others even at his own risk, so there’s courage, loyalty and caring about others. Honesty. He has a sense of right and wrong. And he’s brave, not as in macho but as in doing the right thing.”
Ms. Brunelle says, “In Frankie’s Fantastic Piano a lot of responsibility is placed on his shoulders when he has to perform a rescue. In the second book, The Time Gambler, Frankie’s the one to hold the mantle of great power. There’s an enormous amount of virtue in this boy.”
That’s why he doesn’t abuse the power.

The Time Gambler is even more ambitious than the first book. Marauding ETs from many light years distance are barreling through space in search of a particular mineral their civilization requires. They go from planet to planet, looking to harvest what they need, leaving behind bludgeoned wastelands. On the same day Frankie discovers the diabolical ETs’ plans he must perform at a national music competition in Las Vegas. You will not be surprised to learn that he wins first place.
Only Frankie and his piano can figure out the catastrophic plot. Then it’s up to them to save earth. In a surprising twist, Frankie communicates to the 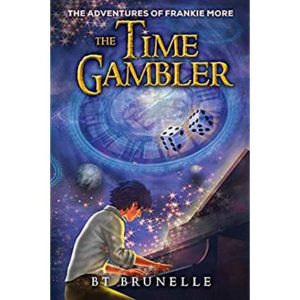 evil female ET commander-pilot in a way that makes her re-consider the deadly attack. Without giving away the surprise, let’s just say music wins over the machine.
Frankie’s followers in Volume 1 and Volume 2 of The Adventures of Frankie More want to know if Ms. Brunelle is writing Volume 3. “Yes, I am!” she says. We’ll find out what possible adventure could top saving the earth.
“My four grandchildren had to wait for their grandfather to finish reading Frankie’s Fantastic Piano before they could get their hands on it. We all love this fun, thrilling and original book, and recommend it for the entire family.” –Bob Pavlovich
“This unforgettable story should come with a warning: Once you pick it up, you won’t be able to put it down. Each chapter is bursting with adventure, surprise, suspense and meaningful messages.” –Kathryn Sanchez, Manager, Teacher, Community Volunteer and Mother
“Frankie’s Fantastic Piano is one of the best books we’ve ever read. It opened up a whole world of imagination and left us with an incredible experience that we’ll never forget. . . . It felt like we were right there in the story, sometimes getting massive goose bumps and shivers all over, and often laughing so hard we couldn’t stop.” –The Loutfi Sisters, Sally, Dima and Maya, ages 9, 15 and 16.

You can find both volumes of The Adventures of Frankie More at amazon.

The Time Gambler (The Adventures of Frankie More) (Volume 2)

Author B. T. Brunelle has called Santa Cruz home since 1968. A UCSC honors graduate, she continued there as a music lecturer, emphasis on voice and songwriting. She founded the original Santa Cruz School of Music in the 70s and headlined at all the hot spots: The Catalyst (where this town became a music mecca), Crows Nest, Crepe Place, Club Zayante, and Kuumbwa, where she performed and taught for years. Ms. Brunelle’s sultry, rich voice carried her original compositions to L. A. audiences, too, among them at the Troubadour, Ice House and McCabes.
She, husband Jon Brunelle and other partners owned The Guitar Works on Pacific Avenue–which, with Union Grove and Cymbaline, formed the triumvirate of super-professional yet chill guitar heavens. Because of her Santa Cruz Singers Workshops and Singers Showcases, and her training of many Santa Cruz voice coaches, she is still remembered as the woman who initiated an ever-growing vocal community in Santa Cruz.

Stricken with an auto immune condition and largely confined to home, Ms. Brunelle daily overcomes the effects of her disability and makes something wonderful for others. In association with fellow singer/songwriter Frankie Moreno, and breaking into young adult fiction, Ms. Brunelle’s creativity is alive and well.