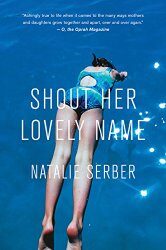 Shout Her Lovely Name is a book of short stories filled with tension and uneasiness, believably described by various characters like a young girl living with her mother, another becoming pregnant for the first time, and yet another trying to be a young mother herself. The title story is written from the perspective of a mother who is trying to deal with her teenage daughter's anorexia, and the mother is worried, bewildered and overwhelmed. Of her daughter, she writes "Her hair, the color of dead grass, hangs over her fierce eyes" as the girl tells her mother, "In case you're wondering, I hate you" (which turns out to be one of the least venomous things that she says to her). Her husband turns against her, and she wonders about divorce. The mother struggles to remember that her daughter must make her choices on her own (as at the same time she enlists dietitians and therapists to help). She tells herself, "Remember, you have always tried to listen to painful problems, to help. You kept your house purged of fashion magazines, quit buying the telephone-book-size September Vogue as soon as you gave birth to her. Only glimpsed at People in the dentist's office. So why? How? How did this happen to your family?"

The story Ruby Jewel tells us about a girl who’s gone to college who’s home visiting her family and who now realizes just how much she’s individualized and become different from her father and mother. “The room with its seashell lamp, swim trophies, and magazines on the desk, the red pencils in a Hellman’s jar, the stretched and puckered swimsuits hanging from the doorknob – was quaint, like an exhibit. Not one thing here seemed to be part of Ruby’s new life. Not the mother’s narrow stopped shoulders or her bony fingers checking over a paisley blouse as if she could discover something about Ruby’s new life in a missing white button.” Alone As She Felt All Day addresses Ruby’s fears of being pregnant by Marco, who’d rejected her, and Free To A Good Home tells us about Marco wanting to become an actor and abandoning Ruby after she gives birth to a child.

These are not pretty stories, but rather stories like primal screams that have been suppressed, sometimes from the viewpoint of a young girl wondering about how she will become a woman, and sometimes, as in This Is So Not Me, about how hard it is for a free spirit to be a wife and mother. In the story Manx Nora mourns her cat (whom she named Phil Donahue) while trying to please her mother, who’s now dating the veterinarian. “Nora missed Phil Donahue so much. But she missed more than just her cat. She missed everything, the pool and Margaret and Jocelyn. She missed the whole idea of a pet. And even with Ruby right in front of her, she missed her mom.”

Take Your Daughter To Work Week is a particularly compelling story about Nora, trying to fit into society and have friends, and her mother, a feminist, “the youngest, hippest teacher in East LA,” who helps an underprivileged student, Elena. In A Whole Weekend Of My Life fourteen-year-old Nora journeys to meet her father for the first time, and he says to her “‘Sweet dreams, Nora’, as if he’d said it every night of my life.”

The differences of men and women andthe differences of mothers and daughters are emotionally explored in Natalie Serber’s stories. Each moment seems to be happening entirely in the present, especially detailing what it’s like to be young and wondering about life. What is a family? we seem to be asked over and over again, and Shout Her Lovely Name informs us that a family can even be just two (deeply) related people.

Christina Zawadiwsky is Ukrainian-American, born in New York City, has a degree in Fine Arts, and is a poet, artist, journalist and TV producer. She has received a National Endowment for the Arts Award, two Wisconsin Arts Boards Awards, a Co-Ordinating Council of Literary Magazines Writers Award, and an Art Futures Award, among other honors. She was the originator and producer of Where The Waters Meet, a local TV series created to facilitate the voices of artists of all genres in the media, for which she won two national and twenty local awards, including a Commitment to Community Television Award. She is also a contributing editor to the annual Pushcart Prize Anthology, the recipient of an Outstanding Achievement Award from the Wisconsin Library Association, and has published four books of poetry. She has reviewed music for Music Room Reviews, films for Movie Room Reviews, Movie Scribes, and FilmSay, and is currently reviewing books and films online for Book Room Reviews at www.bookroomreviews.com and showing artwork professionally.

The Waiting Room by Alysha Kaye