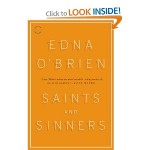 In an interview Edna O’Brien says “I always thought of writing not as an escape but as a path into another kind of universe, another mode of thought and feeling. I believed that words were of themselves animate and, when grouped together, had an alchemy to them.” Renowned in the literary world since the publication of her novel The Country Girls in 1960, Edna O’Brien certainly does continue to create word-magic to this very day with her tales of Ireland and her amazing ability to describe objects, emotions (especially loneliness and camaraderie), and the lives of people.

As the character Rafferty in the story Shovel Kings, O’Brien talks about fights among Irish trench diggers in London: “The fights could be about anything, a girl, a greyhound, grudges, because a foreman had got rid of six men in order to hire men from his own parish, one wrong word, you know, and the punches started. Fist inside the pub, then in the vestibule and finally onto the street, the two heavy-weights vowing murder and the crowd of us on either side of the pavement egging them on, not unlike the time of the gladiators. When things got really bad and they were near beat to a pulp, someone, usually the landlord, would call the cops. If two cops came on foot they did nothing. They stood by, because they wanted to see the Irish slaughter one another. They hated the Paddies. When the Black Maria pulled up, the two of them with blood pouring out of them were just thrown into the back, to fight it out before they got to the station. That’s what gave us a bad name, the name of hooligans.”

Another story, Plunder, is both beautiful in its description of a small farming town and horrifying in what occurs there when it’s invaded by soldiers: “Not a soul in sight. Not an animal. Not a bird. Here and there mauled carcasses and bits of torn skins where animals must have fought each other in their last frenzied hungers. I almost got away. I was walking towards somewhere that I didn’t know, somewhere safe. There had been

no soldiers for weeks. They’d killed each other off. It was hard to know which side was which, because they swapped sides the way they swapped uniforms. My mother and later my brother and my two sisters had been taken. I was out foraging, and when I came back our house was a hulk of smoke. I only had the clothes I stood up in, a streelish green dress and a fur coat that was given to my mother once. It used to keep us warm in bed, and sometimes when it slipped onto the floor I would get out to pick it up. It felt luxurious, the hairs soft and tickling on bare feet. This was the old world, the other world, before the barbarians came.” Unfortunately the speaker in this story next encounters one of war’s horrors.

And, just to see one more side of Edna O’Brien’s wonderful fluid writing, here is a paragraph from the story Old Wounds, about a woman whose cousin is dying: “I wanted to put things right. I wanted to say, ‘Let’s talk about the tombstone and then forget about it forever,’ but I couldn’t. The way he glared at me was beginning to make me angry. I felt the urge to shake him. On the bedside table there was a peeled mandarin orange that had been halved but left
untouched. There will be another time, I kept telling myself. Except that I knew he was dying. He had that aghastness which shows itself, months, often a year, before the actual death. We were getting nowhere. The tension was unbearable, rain splashing down, and he with his head lowered, having a colloquy with himself. I reminded myself how hardworking, how frugal, he had been all his life, never admitting to the loneliness that he must have felt, and I
thought, ‘Why don’t I throw my arms around him and say something?’ But I couldn’t. I simply couldn’t. It wouldn’t have been true. It would have been false. I knew that he despised me for the falsity in my coming and the falsity of my not bringing the matter up, and he despised himself equally for having done something irreparable.”

Edna O’Brien writes all her books in longhand. “I write and rewrite and then I dictate. It’s all quite unnerving. What I feel about writing by hand – I may have a few soul mates in this – is that there is a connection between mind and heart and hand and the sequence of the words themselves. I feel that a typewriter or a word processor would be an artificial barrier, would stymie the flow between conscious and unconscious. It is not a fashionable or a practical
view, but then I never prided myself on being practical.”

Abundant and rich with language, versatile in characterization and plot line, and within them able to imagine herself as so many other people, Edna O’Brien’s short stories are at the very top of the list of those writers who seek to elevate the language. Poetic and plaintive, and yet very down to earth, I high recommend Saints and Sinners to everyone.

Christina Zawadiwsky is Ukrainian-American, born in New York City, has a degree in Fine Arts, and is a poet, artist, journalist and TV producer. She has received a National Endowment for the Arts Award, two Wisconsin Arts Boards Awards, a Co-Ordinating Council of Literary Magazines Writers Award, and an Art Futures Award, among other honors. She was the originator and producer of Where The Waters Meet, a local TV series created to facilitate the voices of artists of all genres in the media, for which she won two national and twenty local awards, including a Commitment to Community Television Award. She is also a contributing editor to the annual Pushcart Prize Anthology, the recipient of an Outstanding Achievement Award from the Wisconsin Library Association, and has published four books of poetry. She
currently reviews movies for and , music for , and books for .

A round table discussion about book banning in America

Life Lessons: Self Help From The Silver Screen ebook review