Suzy Davies is a Children’s Author, Romance Novelist, Poet and Founder and Book Reviewer at Sunshine Book Reviews.
“Luna The Moon Pig: The Pig Who Hid,” her latest book, is illustrated by award-winning world-acclaimed illustrator and animator, Sheila Graber, famed for her work with Paddington Bear and family, B.B.C Children’s Television Paddington Bear Specials, and her illustration and animation of Rudyard Kipling’s “Just So” stories.
Suzy’s first children’s book was “Snugs The Snow Bear.” Her debut novel was “Johari’s Window,” a memoir and romance novel.
Suzy has been a writer from an early age. Following her first degree at Leicester University, she read for an MA in English Literature at the University of Sussex, in England.Follow her on Twitter

Daring Dreamers club is a Middle-Grade book, suitable for children aged 8 or 9 plus. It is a “girl power” book in the sense that it has an almost all female cast. The concept, however, tends to come across as catch-all and formulaic. The characters are taken from diverse cultures. Different “types” of personalities are represented. Milla starts out as the cotton-wool kid or baby, there’s a sporty, loud tomboy girl, Ruby, a feminine sporty type, Mariana, Zarah, a Muslim, who is “a work of Art”, and the scatty budding food scientist, Piper, with red hair. 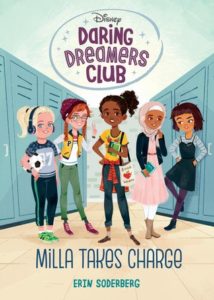 The Daring Dreamers Club is founded by a new, rebel school teacher, Mrs. Bancroft, (who is based on a real-life inspirational teacher,) and I am reminded of “The Dead Poet’s Society.” The difference is that the teacher in Daring Dreamers Club is a kind of “fairy godmother,” who enables the girls to face challenges, overcome obstacles and work towards the fulfillment of their dreams. This teacher makes her mark with inspirational words taken from fairy tales, which is reflected in her “break” with “traditional” beige classroom decor. The Dreamers’ classroom and the adventure challenge represent magical, transformational spaces where the girls thrive and find the princesses in themselves. (with a little help from others.)

Mrs. Bancroft seems to be the perfect “gift” sent to Milla, who wants to be an author.

At the beginning of the story, we are shown Milla’s “false starts” as a writer. In a mimetic text, we see Milla “rewriting” the beginning of her own fairy tale. Her pet pig, “Chocolate Chip,” undermines her attempts at scene-making and subverts the idea that a male pig could be a prince hero. Milla becomes more and more aware that she must change the script, be the hero in her own story, and take charge. After all, dreams need to be worked at to come true, even if the fairy godmother teacher has a wand!

The false beginnings Milla writes are echoed in the obstacles she faces when she wants to go on the adventure challenge. She is afraid her parents will not let her go. Although her mom and mum parents met on an adventure trail and are well-traveled, Milla seems vulnerable. She has a scar on her face where she was bitten by a dog, and she has food allergies. Milla believes she has to prove she is strong and responsible before they will let her go anywhere without them.

The Daring Dreamers Club has many elements of a fairy tale. In the first challenge Milla faces, she takes her pet pig to school and tries to keep him under control, but “Chip” escapes. He appears to be the antagonist. When Milla and her friends get permission to walk to school without supervision, they meet a runaway dog, who also appears to be an antagonist. They help return the dog to his owners, which delays Milla. She breaks a promise to her mum, and she is late for school. Her third challenge is to cook a meal for her parents. Piper helps her but has to leave early and the kitchen is left in disarray. Milla is afraid that because neither of her parents has signed the permission slip for her to go on adventure camp, they do not want her to go. However, at the last minute, she finds out that her parents know she is trustworthy and responsible; she has shown them through the choices she has made and through her actions. The adventure camp sees the girls bond closer together as they face “team” challenges. Milla is faced with difficult decisions and choices and emerges as a leader. All of the characters grow, but some grow more than others. Significantly, it is a male counselor who “crowns” the Adventure Camp Champions, Milla, and Zahra. In Milla’s mind, Peter, the counselor, now looks at her at a different way from before. Even as a champion, Milla is an object of the male gaze, and needs his confirmation of her triumph.

Overall, I enjoyed the book. The best part was the dialogue, which sounded natural. I had some issues with the formulaic, overtly commercial characterization, which lacked nuance. I was also disappointed that the heroine who wanted to set off on her own and “conquer” the world, should depend on a male to confirm her self-worth at her moment of triumph.

Check it out on Amazon

Your Smile has a Window by Matthew Boyd