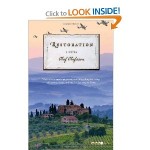 Restoration is about two young women, Alice and Kristin, who have made mistakes in

their relationships with men, Alice as an adultress and Kristin as the mistress of an already married man. It is the summer of 1944 in southern Italy and Alice is married to Claudio, a farmer and landowner in San Martino, despite the protests of her well-to-do British expatriate family. Their farm, Val d’Orcia, is now over-run with fugitive soldiers fleeing from the prison camps of the Axis along with refugees and orphans and ruthless Germans moving forward in the line of war, as “In war, God is nowhere to be found.”

Travelling towards Alice’s farm is also Kristin, coming from Rome abd having perpetrated an unusual act of revenge that has her looking for a supposed early Caravaggio painting that Alice has in her possession to mollify the Germans. Alice, who hasn’t seen her husband Claudio for a long time, is always talking to him in her head: “I talk to you as I lie in bed in the evenings, just as I used to when you were here and everything was fine. I tell you about the events of the day, now that the war has come to our valley and the Germans and the Fascists watch our every move. I tell you the things that I hesitate to write in this diary for fear the Germans will find it when they come back. I’ve received a warning because of the rumors that I help the partisans and shelter Allied soldiers. I don’t care about myself, but I can’t endanger the children and other people.”

In a series of flashbacks we learn of all the events that led up to this time. When Alice married Claudio “She was twenty-two and saw no prospect of every doing anything that mattered.” Kristin had left her home in Reykjavik, Iceland to study art in Copenhagen and later began to work for a famous restorer in Rome, Robert Marshall, who had a beautiful wife named Flora. Alice liked Val d’Orcia and she and Claudio purchased it and she set about educating the illiterate children on its many tenant farms. Kristin began an affair with Robert Marshall (who praised her restoration talents, especially her over-painting) although it seemed to be a dead end for her because she doubted that he’d ever leave his wife. And Alice had a brief affair with Connor, a Britisher she’d known while growing up in Florence, when she went to Rome to visit her mother.

But when Alice had a child, Giovanni (who dies at an early age after his illness is initially misdiagnosed), she mourned his death deeply. “The only flowers on the grave are bluebells, Giovanni’s favorite….When he was dead, she sat beside him and sang a lullaby for him until her husband took her arm and led her out. She was still singing it when they climbed into the car that was waiting for them outside the hospital, and later in their hotel room. She did not stop until, unable to control herself any longer, he screamed at her. He had done this before. She can still hear the echo of his scream in her bad moments.

Kristin, whose ankle has been injured, now stays with Alice and teaches the refugee children. She is looking for a Caravaggio painting that Robert Marshall has sold to the Germans and that Alice has hidden in a secret vault with her jewelry, important documents and photographs, on her property, and Kristin has more than a small interest in this painting. Robert Marshall has taught Kristin about restoration, that “No canvas last more than two centuries. If left alone, they all turn into dust. Those who think that art restoration is simply dusting and cleaning exhibit incredible naivete. Interpreters, Kristin, that’s what we are.”

In Olaf Olafsson’s novel restoring the past is impossible, both for Alice, who yearns never to have slept with Connor and to have been speaking with him instead of being at Giovanni’s side when he was dying and had asked and asked for her, and to Kristin, whose restoration at one point becomes a type of forgery that she later regrets. “It doesn’t take much to turn one’s thoughts to the past, not when one longs for a respite from the here and now – a word, a movement, a shard of light in a mirror, the echo of a voice through a half-open window.” Although Alice fears that Claudio has dallied with a widow on one of their tenant farms and thus committed adultery himself, she still cannot forgive herself for her infidelity as Claudio keeps asking her where she was on that last day with Giovanni at the hospital, and then Claudio disappears. As for Giovanni, “….all I could think about was how wasted his body was from the illness. He was like a little sparrow and I bent and took him in my arms and held him by the open window.” Alice had brought Giovanni a canary back from Rome, whom he called Petro, and told him stories about Petro’s adventures outside of the hospital.

The front advances and Alice flees with a group of grown-ups and children and ends up in Montepulciano, while Kristin hides in Alice’s secret vault (because of her ankle injury) with others who can’t undertake the journey.

“The road was hard and dirty, the grass by the roadside dry and brittle, and the heat was merciless. After the forest stretch, which was flat, the road began to climb a long slope and some of the children began to wilt…..The bodies of German soldiers lay scattered at the foot of the hill….The shelling grew close behind us and the crash of explosions tore the silence.”

But Alice is determined to survive, and with a bit of luck she does, as does Kristin. Decades later Kristin’s Caravaggio surfaces at the National Gallery in London. Olaf Olafsson has a talent for weaving together an intricate plot tapestry that will keep his readers wondering about what will happen next, and that is intensely tuned-in to human interactions and emotions. A great book about the upheavals of war and the consequences of desire.

by Nicole Anderson
No Comments