Rather Outspoken: My Life In The News book review 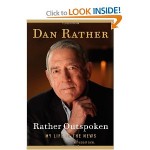 “Rags,” he finally said, using my father’s nickname that had been passed on to me in my youth, “You don’t want to face it, I know. But you’re finished there. They decided to scapegoat you, throw you to the wolves and be rid of you. They’re doing it to save themselves. It ain’t fair or right, but it’s what is. And the sooner you recognize it and deal with it, the better off you’re going to be,” an old friend informs Dan Rather. But Dan “had wanted since childhood to do extended great reporting, work that might stand with the best of my time, if not the best ever. And I had not achieved that. Not nearly. Not yet.”

Rather had spent most of his career at CBS, which he loved, and was now 74. Others might disagree about his career, in which he’d done “big interviews, world-class executive stories, breaking news and long, good reporting runs on big stories and the like.” But some colleagues at CBS had turned against him. One of them even “made a series of secret telephone calls to newspaper writers lambasting me personally and professionally,” but without using his name. Rather reported a true story about President George W. Bush’s “dereliction of duty during Vietnam” for which he was ousted from CBS. Prior to this he had also written about military personnel torturing Iraqi detainees at Abu Ghraib prison, “the Baghdad Control Correctional Facility.” Rather wrote the truth, but it wasn’t popular. “The U.S. Department of Defense was encouraging the mistreatment and perhaps torturing of prisoners.” Chip Frederick confessed that at least one prisoner had died during questioning. Released copies of digital photos taken at the site secured the story. But the story was controversial and “made CBS look bad.” Rather thought of himself as a team player, loyal to CBS News, and loyal above all to its long and honorable tradition of honest reporting, and he hated it that “those truly responsible for Abu Ghraib have never been held accountable.”

Because of the George W. Bush dereliction of duty in Vietnam story, Rather was asked to apologize on the air (after having done nothing wrong) and later to resign (having been promised that he’d be on 60 Minutes Sunday). Later Rather’s wife told him, “You got into a fight with the president of the United States……During the heat of his reelection campaign. What did you think was going to happen?”

Rather’s father loved newspapers and respected reporters, so Dan grew up wanting to be a reporter, starting out with his creation of his own newspaper at William G. Love Elementary School. However bouts of rheumatic fever made Rather bedridden and unable to do anything but listen to the radio (he liked Edward R. Murrow’s This Is London). His mother helped him get into Sam Houston
State Teacher’s College and Professor Cunningham helped him get odd jobs. Eventually he got a job at KTRH in Houston that “boomed all over the Gulf Coast with 50,000 (watts).” At the radio station he met Jean Goebel, who became his wife on April 21, 1957, and they have been married for 55 years.

In 1960 Rather started at TV Channel KHOU, where he created the 6 PM and 10 PM newscasts and covered Hurricane Carla. Then Rather became a full-time correspondent at CBS, just to be sent back to Houston to head the Texas Bureau, which consisted of – him (with a part-time cameraman, Bob Wolf, and a guy from the Program Department, Bob Levy, who “helped out on an as-needed basis”)! Covering Civil Rights stories involving the Ku Klux Klan, being at home 31 days one year and 43 the next, “I struggled to remain an honest broker of information, and where possible to report both sides of the story. Now, however, I saw brutality on a daily basis, and it was a shock from the very beginning…. What I saw…….was much more than just racial prejudice. It was hate, and hate with an intensity and a virulence I’d never seen before. I saw not just Klan rallies but cross burnings, and people beating women and children. Time after time I said to myself, ‘I can’t believe what I’m seeing, but I’m here to be an eyewitness, and to make the camera a witness.'”

Throughout many presidencies, through Vietnam and Afghanistan and everything in-between, Dan Rather always felt that “the people have a right to know what is being done in their name, and when the press finds out that something’s not right, we have an obligation to call attention to it.” Dan Rather now has a TV program on HDNet, Mark Cuban’s network, called Dan Rather Reports, finally doing the in-depth investigative journalism that he always wanted to do (and he has won many awards for his new work). Informative and fascinating, Rather Outspoken is the autobiography of an amazing, hard-working and honorable man that you don’t want to miss!

Rather Outspoken: My Life In The News, an autobiography by Dan Rather published by Grand Central Publishing on May 1, 2012, 320 pages.

Christina Zawadiwsky is Ukrainian-American, born in New York City, has a degree in Fine Arts, and is a poet, artist, journalist and TV producer. She has received a National Endowment for the Arts Award, two Wisconsin Arts Boards Awards, a Co-Ordinating Council of Literary Magazines Writers Award, and an Art Futures Award, among other honors. She was the originator and producer of Where The Waters Meet, a local TV series created to facilitate the voices of artists of all genres in the media, for which she won two national and twenty local awards, including a Commitment to Community Television Award. She is also a contributing editor to the annual Pushcart Prize Anthology, the recipient of an Outstanding Achievement Award from the Wisconsin Library Association, and has published four books of poetry.

She has reviewed music for Music Room Reviews, films for Movie Room Reviews, Movie Scribes, and FilmSay, and is currently reviewing books and films online for Book Room Reviews, whose address is www.bookroomreviews.com.

A Class Apart by Stephen Henning – a Book Review