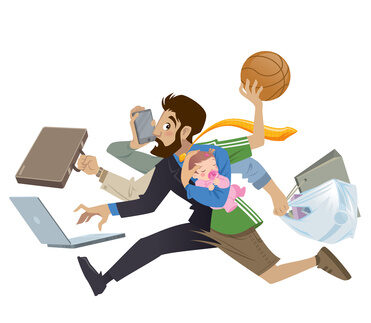 How tough can it be to raise two kids? About twice as tough as raising one, right? Guess again. You see, when it comes to children, the normal laws of logic, space and time no longer apply. Raising Siblings is many times more difficult than raising one. How many times? No one is sure. Scientists have tried to measure it, but their instruments are simply not designed to withstand the withering levels of sarcasm involved in getting close enough to take readings.

Nevertheless, if through no fault of your own you find yourself in the position of having to raise two or more children at the same time, do not despair. The technology to help you is at hand provided you know where to look. Here is a run down of potential problem areas and the equipment you can use to nudge your chances of maintaining your sanity above 50-50.

I want the big bit!

You have a Kit Kat bar. In an act of wanton generosity, you give it to your kids to share. You have two kids, so that’s a couple of fingers each. What could possibly be easier? Well, molecular biology, quadratic equations and quantum physics for a start. Immediately on being given the tasty treat, your kids begin an epic struggle about who should get the bigger fingers. You roll your eyes and swear this will never happen again.

Next time, you give your kids a whole Kit Kat each. This time hostilities commence over who should get the bigger bar. Inevitable? Not if you get the right equipment. With nothing more elaborate than a laser scalpel, a scanning electron microscope, and an analytical scale sensitive to the nearest 0.0001g, you can ensure that fights over portion sizes forever become a thing of the past. Instead, your kids can fight over whose turn it is to use the laser.

You’re sitting in my place!

It is a scientific fact that youngsters sitting at a slightly less favorable angle than their siblings in relation to a TV screen are subject to such catastrophic loss of sensory input they becomes completely unable to see or hear anything from around the area of the screen at all. Obviously, when faced with devastating consequences of this order, children quite justifiably react by screaming at each other at volumes audible in neighboring cities.

In the bad old days, making sure that one child was positioned at precisely the same distance and angle as another involved extensive use of tape measures, slide rules and conversion tables. Nowadays, satellite-tracking technology can be employed in conjunction with powerful computer software to streamline the whole process. Simply Scotch tape a GPS-enabled chip to each child’s head, monitor his or her exact location on your tablet, and use the built-in software to make all the necessary calculations. As a bonus, whenever there is a bedroom to be cleaned or a homework assignment to be completed, the GPS tracking technology allows you to discover what bed your children are under, closet they are in or chair they are behind.

I’m not smiling if he’s here!

Victorian family photography, despite requiring cameras roughly the size of small cars, was in many ways an easier affair than its modern equivalent. This was largely because the long exposure times involved meant no one was seriously expected to hold a smile while the photograph was being taken. Instead, it became the custom to glower furiously into the lens. Such technological constraints fit very nicely with the realities of family life since, as every parent knows, the scowl is the natural expression of any child trapped in the presence of a sibling.

nothing but beaming smiles. For many decades, this feat was achieved only through near super-human levels of perseverance. Luckily, modern digital editing software means that family members can now be photographed at different times and then cut and pasted together to make the finished portrait. Thus, siblings can appear in the same photograph without ever having to be in the same room at the same time – or even, through the use of Dropbox, the same country.

If you have a second child within three or so years of the first, the dreaded “double diaper change” is a distinct possibility. To the uninitiated, this may seem a daunting prospect. In fact there is no reason why you shouldn’t eventually be able to nurse yourself back to near full health provided you undertake the process using the appropriate equipment.

Most obviously, you should invest in a full body HAZMAT suit, ideally of Level A protection. This not only comes with self-contained breathing apparatus (SCBA), but also a voice-operated two-way radio, allowing you to coordinate your efforts with those of your partner. Failing that, a wet handkerchief securely fastened over your mouth and nose with the belt from your bathrobe may help slow the liquefaction of your lungs. Dispose of the used diapers as quickly as possible in a heavy duty steel containment vessel, then encase this in a concrete block and dump it at sea, preferably somewhere over the Marianas Trench.

You may also find it useful to have several tons of appropriately colored latex paint on hand. This won’t help with the disposal of the diapers, but can be used on the walls of your house to replace the original surface coating, which will almost certainly have been flaked, blistered or dissolved by the fumes.

For reasons that are too obvious to need any explanation to the likes of parents, no two siblings can ever be expected to agree to watch the same TV show at the same time, even when said show is each child’s favorite individually. This can obviously lead to physical altercations about which child should get custody of the remote. Unfortunately, modern remote controls tend to be made only of heavy-duty plastics, rather than more suitable materials, such as titanium.

An elegant workaround is to simply bury your remote in a 500-pound bale of cotton, sandwiched between small mattresses and fastened with an old garden hose. This will provide adequate protection against all but the most intense squabbles. Channels can be changed simply by pointing the bundle in what is assumed to be the correct direction and then jumping up and down on it.

And so there you have it. Yes, raising siblings  can be a daunting task, but it need not be an impossible one. With nothing more than the few pieces of equipment outlined above, a standby ambulance and rescue helicopter, you should have everything you need to ensure that raising siblings is a completely manageable activity and really no worse than be mid-size prison riot or a border skirmish between two hostile nations.

Bun Karyudo is the father of two teenage boys. This experience has had such a devastating effect on his appearance, he now wears a paper bag on his head at all times. (He uses an umbrella when showering.) His blog, Bun Karyudo’s Scribblings, can be found at http://www.bunkaryudo.com. Please feel free to check it out.

If you were me and lived in ……..By Carole Roman

What Makes a Good Children’s Book?