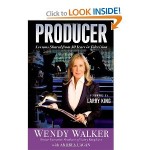 “When they announced his intention to end his nightly show, he was at the top of his game and he left everyone in his life and the entire world wanting more – including me,” writes Wendy Walker, talking about Larry King of the Larry King Live television series, which was cited in the Guinness Book of World Records for being the longest running show with the same host and the same time slot on the same network (during the 17 years that Wendy produced it). By being the person who originated the phrase “hanging up my nightly suspenders for the last time” for Larry King, Wendy was also giving us a word to the wise about timing, as she does on a number of topics at the end of each chapter of her book to teach us what she’s learned about integrity in business (highly unusual from a TV source!) and life happiness.

In the Foreward to this book Larry King writes, about Wendy, “I have never doubted my wisdom in hiring Wendy Walker as my executive producer, a woman whose loyalty and actions rise high above her job description…..And I love her with all my heart.” Up to now Wendy Walker has spent 30 years all-told in television, beginning modestly by studying art (her passion) in Paris through a college program and then working at a Brooks Brothers shop in Washington, D.C. where her friendliness prompted Ethel Kennedy to first ask her to be her son Joe’s partner at a dinner for legendary football player Don Klosterman and then her own personal secretary (through which she got to know Ted Kennedy and even Jackie Onassis and helped to plan Jackie’s 50th birthday party). A year later she “caught the producer bug” and eventually worked as a CNN White House producer for 10 years.

Imagine (even though you’re behind the scenes) dealing with guests like Cher, Marlon Brando, Ronald Reagan, Yasser Arafat, Gorbachev, Mick Jagger, Bill Clinton, the Dalai Lama and President Obama, and being hugged by Jim Carrey because you like comedians! Wendy claims that it all began when she was 3 years old and wearing her “fat coat” in 1956 and then Vice President Richard Nixon came to her town and picked her up out of a crowd and she had her picture taken with him for the press (and had it autographed by him many years later!). Oprah told Wendy that she liked her outfit, which thrilled her, and Wendy’s (then) husband Ralph got Paul McCartney, her idol, to sing at her birthday party! But in between all of these pleasures there was work, work, work (e.g. being on call 24 hours a day at CNN, since they never stopped broadcasting, and dealing with travel disruptions and nature problems like a tsunami stopping the immediate possibilities of a satellite feed). On the day that Michael Jackson died, Wendy had to change her entire program over and over (one factor being that right before him Farrah Fawcett died of cancer) and then later had to make the call of which of all the shows to present (deciding on Michael Jackson’s because his death was the most shocking), with all the subsequent juggling of

This is a woman who’s woken up to approximately 200 emails each morning and whose life has involved a great deal of pressure and many split-second decisions and choices. In her words of advice and wisdom at the end of each chapter she shows us how she’s coped by not freaking out, being someone others wanted to be around, paying close attention to all details, organizing, thinking bigger than big, being grateful and working harder than everyone else. And she admonishes, “To me, being true to yourself is the only way to go. That is the best that anyone can ever do.”

An extraordinary woman who obviously never saw herself as “lesser,” Wendy Walker is a shining example of achievement to us all, a true product of what extremely intense work can accomplish. Reading Producer is enjoyable, as we discover situations and celebrities along with Wendy in her life stories and also yearn for the possibility of being more than we already are. An immensely readable book, of which Suzanne Somers writes, “You will emerge from these pages changed for the better.”

Producer: Lessons Shared From 30 Years In Television, by Wendy Walker (with Andrea Cagan), published by Center Street on November 16, 2010, with a Foreword By Larry King, 320 pages.