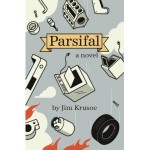 Parsifal used to live primitively in the forest with his mother but now he lives in the city by himself, repairing fountain pens in order to make a living. In both places “things” keep falling from

the sky (microwave ovens, toasters, refrigerators, etc.) unexpectedly, and can hurt and even kill people if they don’t move out of the way in time. Parsifal, like the Parsifal of legend, is on a journey, but his is not to seek the Holy Grail but a cup that his father Conrad made for him with the word Fenjewla on it, which he is convinced is still in the forest (and he is also simultaneously on a inner journey). Author Jim Krusoe accomplishes this unique character portrait (and a reflection of our current society) through his particularly poetic and philosophical writing.

Parsifal believes that the earth and the sky are at war, and finally concludes: “So much for a truce in the war between the sky and the earth. So much for anything ever getting better. So much for an end to the endless cycle of destruction and being destroyed, of hatred, and revenge, and pride, and fear. Because far from it being some kind of blemish on the face of the world, Parsifal now realized that he had gotten the whole idea wrong. War wasn’t the answer; it was the entire game plan. Destruction and violence wasn’t the aberration, but the norm, the very axis on which the world was poised. These so-called negative elements were not merely dissonant sparks from the fire of goodness burning somewhere; they weren’t sparks at all, but the molten core of things itself. Things falling; things going up in smoke – this was the mechanism, the motor that turned the wheels of the vast and mindless world. Maybe it wasn’t revenge at all, or hatred, or any of the names that our puny human vocabularies could bestow on this destruction; maybe it was more like inhaling and exhaling.”

Parsifal also wonders, “Had the past been only a dream?”, and he decides that “he had been a fool.” Dallying with librarians (Parsifal seems to have been taught more by women than by men), wondering about the nature of monsters, trying to understand why he always sees blind men with canes near his home in the city, and dwelling on “….how much of any of us is past, and how much present? How much is memory, and how much action?” Parsifal tries to get by, day by day. He has experienced two particularly ravaging fires, one of which included his mother and one at the Happy Bunny Preschool (for which he is blamed). He remembers what his mother used to sing (“The silence of a falling star/Lights up a purple sky”) and he also muses, “It rains in my heart like it rains in the town; so what really is this sadness that creeps into my heart?” His is a constant search for meaning, and even beyond that, for the meaning of many, for us all as human beings. Parsifal is told, “Sometimes you can go back to what was, and sometimes, no matter how much you want to, you can’t” and “what was broken can never be fixed completely” and “nothing can be made as good as new”, which is also true, practically, when repairing fountain pens.

During his internal mental examinations Parsifal appears enchanted (thinking about what most of us don’t think about) and also very much alone. He decides that “maybe a monster is simply anyone who does not ask the question as to whether he is a monster or he isn’t”, and that “all searches are the same search.” Yet it is easy to identify with Parsifal as all of us have had some darkness in the past that reaches into the future. But, “Was this a dream, or did it really happen?” he wonders, as living at different points sometimes changes the sensations of former times.

I would have liked to meet Parsifal, and you will feel this way too! Humorous, magical, sweet, bitter, obnoxious, angry and blundering through the world as we all do, Jim Krusoe’s writing about Parsifal is at the same time deep-thinking and amazingly light. A book that sees right past the ordinary into the extraordinary nature of our lives, looking for perhaps what can’t be found, Parsifal culminates in the understanding that it’s always worth the journey.

Reviewed by Christina Zawadiwsky
Christina Zawadiwsky is Ukrainian-American, born in New York City, has a degree in Fine Arts, and is a poet, artist, journalist and TV producer. She has received a National Endowment for the Arts Award, two Wisconsin Arts Boards Awards, a Co-Ordinating Council of Literary Magazines Writers Award, and an Art Futures Award, among other honors. She was the originator and producer of Where The Waters Meet, a local TV series created to facilitate the voices of artists of all genres in the media, for which she won two national and twenty local awards, including a Commitment to Community Television Award. She is also a contributing editor to the annual Pushcart Prize Anthology, the recipient of an Outstanding Achievement Award from the Wisconsin Library Association, and has published four books of poetry. She currently reviews movies for , music forhttp://www.musicroomreviews.com, and books for .

Nonsense And No Sense And Somewhere In Between – A Whimsical journey with poems by Cindi Walton ; a Book Review

The Silence Between Us by Alison Gervais

The Adventures of Frankie More Frankie’s Fantastic Piano  Book One