Paddy’s Star a book for children by A. Cooper

Paddy’s Star a book for children

A heart-warming Christmas adventure where 12-year old Paddy sends his best friends on a quest to solve a riddle and find the German Shepherd, an immortal Wizard. They travel to mystical places hidden between the stones of the old Druid Temple before returning to Paddy. There is magic all around them and Paddy makes one last wish before having to say goodbye forever

Paddy is a boy with leukemia who only has a few weeks left to live. His parents bring 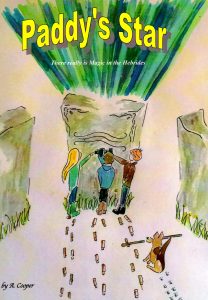 He can observe the dramatic scenery and weather from his room. Paddy finds a book and when he opens it, a ghost appears. The ghost has been trapped in time and has one chance to be reunited with his family. Paddy wrestles up the help from his friends and sends them on an adventure. A stocky Highland bus driver takes the children to an old druid temple where they look for the German Shepherd, an immortal wizard who can help them. He appears in front of them and gives the scared children a riddle to solve. The three friends travel between dimensions hidden amidst the stone circle to find ingredients which will break the old spell which is keeping the ghost trapped. Once they complete their search, they drive back to Paddy in the crackling bus while trying to figure out what to do next. However, help out of an unexpected corner is at hand and soon it will be time for all to Say Goodbye Forever.

Paddy’s Star is available at Lulu.com

About the Author Ann Desseyn-Cooper

A few years ago Ann Desseyn-Cooper stayed in an old fisherman’s cottage in Uig on the Westcoast of the Isle of Lewis which is situated in the North West of Scotland. The views were amazing and the weather created the perfect atmosphere for sitting by the sputtering coal fire and dreaming away. It made her realize how lucky she was to be alive. Her best friend, Aline Carpentier, died of accute leukaemia during her last year in Barnum (Roeselare) and with this book she hopes to keep her memory alive. Without distractions around her and stimulated by visual clues in and around the house, a story started to form. So, in haste she drew a story board. No TV, no radio, no internet connection and no phone signal, that was her secret. Not to mention she accidentally locked an otter in the shed whilst taking out the bin. She hopes that this story will help children to Say Goodbye Forever to their friends.Ann still lives in the Hebrides and more books will follow in the coming years. Should you wonder what the funny sounding words in the book are, they are in a language called Scots Gaelic.