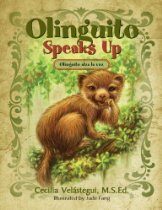 In August of 2013 Scientist announced to the world (or who ever was listening)that a new Mammal was discovered.It was discovered in the Andean Cloud Forests of Columbia and Ecuador.It was given the name Olinguito it was described as a cross between a cat and a teddy bear and a member of the Raccon family.That in itself is all pretty cool.It’s not often a new animal is found.

Oliguito Speaks Up is a bilingual (Spanish/English) picture book about you guessed it, An Olingual . It turns out the little guy is a little shy and the other animals in the forest don’t even know about him.Oliguito becomes intrigued by the stories being told by Tomas the 200 year old Tortoise .As he hears of the Tortoises friends long gone he explains to the other animals why he stayed hidden in the forest.

A very educational full size picture book.Kids will learn a little of the Galapagos Islands,the danger to animals and that some are now extinct. Each page is written in English and Spanish. The illustration is done very well, With vibrant,colorful pictures. The author does a great job of mixing the facts with the cute little animals in a fun way to get the kids interested not only in the book but maybe to start asking questions and peak their interest to maybe learn a little more.
[youtube

As a child in Ecuador, Cecilia spent vacations on her family’s banana plantations in the cloud forest region of Santa Domingo de los Tsáchilas. These idyllic vacations, running carelessly with cousins among an overabundant natural landscape, full of toucans, monkeys, and a few dangerous snakes, left indelible memories.

When Cecilia read of the 2013 discovery of the new mammal species, the olinguito from the Andean cloud forest of Ecuador, she could not sleep for days trying to recall that, if as a child, she had ever seen the olinguito as it nibbled on large figs at dusk. Her novelistic mind took over, and she sat down to write this poignant tale about Olinguito and Tomás.

The character of Tomás, the ancient teller of tall tales, is based on her family’s 150-year-old Galápagos tortoise. The tortoise was a constant fixture in her family’s life––beloved and yet ignored–– much like elderly great-grandparents everywhere. It witnessed much family happiness and sadness, and it was said that if the tortoise could speak, it would tell a truly incredible tale. The whereabouts and destiny of Cecilia’s ancient tortoise remain a mystery––which gnaws Cecilia to this very day. By writing Olinguito Speaks Up, Cecilia wanted to pay tribute to her Arcadian childhood vacations and to her native Ecuador. The message of Olinguito Speaks Up is: honor our elders and cherish our wildlife.

Cecilia’s debut novel for adults, Gathering the Indigo Maidens won the Mariposa Award, Traces of Bliss and Missing in Machu Picchu won First Place at the International Latino Book Awards in New York City during Book Expo America. Her fourth novel for adults, Parisian Promises, will be published in 2014.