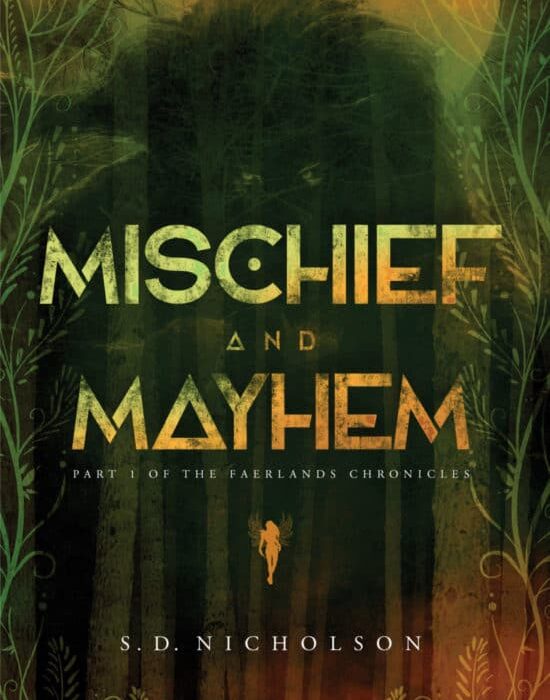 The Faerlands Chronicles is a dark fantasy for adults that will sweep them away to a more magical land. Mischief and Mayhem follows protagonist Ophelia Maplewood on a twisted journey through the realm of the Faers. After lying dormant for centuries, a dark presence awakens. While malicious forces quietly stir in the southern nation of the Meadows, Ophelia, along with

her companions from the Woodland Scouts, set out into the darkness. Soon, they find new strength and allies in the north – along with an unexpected human. Joining Ophelia and her Scouts may be his only means to salvation, as he quickly discovers what little understanding of the hidden worlds surrounding his own he really has. Will their journey bring balance to the homeland and prevent chaos from spreading to the other realms? Only time will tell.

AUTHOR OF THE NEW NOVEL MISCHIEF AND MAYHEM: PART ONE OF THE FAERLANDS CHRONICLES

Question: Tell us what Mischief and Mayhem is all about.

S. D. Nicholson: Mischief and Mayhem is the first of its series, introducing a mythical race that is rarely spoken of: the faers. Their realm is isolated from the rest of the world, which includes the medieval human race, sea faring trolls, and more to be introduced. A disturbing force of resurrected faers, humans, and trolls destroyed the southern most nation of the Stones and are warring against the Meadows. Our story begins in the Woodlands in the north, where many are unaware of what is occurring in the south. As our characters make their way south to the capital of Nectar, in the Meadows, they encounter their own fair share of raiders, demons, and alleys. The plot thickens as the realm’s protectorate, the sphraali, are being sought after by others. If their power is released, it could mean the end for life in the Faerlands.

Q: This is your first novel – what got you interested in writing?

Nicholson: For the few who knew I was writing the manuscript; it was all about an escape. I was a commercial real estate agent at the time and was enjoying it, but it was a relentless grind, day in and day out. Stepping away from it, I have a far greater appreciation for the brokers who survive and keep at it. Mischief and Mayhem was my outlet into a world other than my own, dictated by the rules I chose. I feel like a broken record, but I truly believe in the concept of “escape through entertainment” and I decided then that I wanted to not only escape, but become the creator of the worlds I escape into.

Q: Where did the idea for the The Faerlands Chronicles series come from?

Nicholson: It’s difficult to narrow inspiration down to specifics. From my own childhood adventures to reading Lord of the Rings and Game of Thrones to “ticking away the moments that make up a dull day,” I want to say everything has been an inspiration. I believe every interaction we have, be it with others or in an activity, shape how we view the world. In this case, I feel like the realm of the Faerlands is constantly growing and evolving as I too learn and do more.

Q: Many fantasy books today are aimed at teens. Why did you choose to write for adults

Nicholson: Honestly, I find it easier to target adult interests more than teens or young adults. Yes, adults are more complex in their judgment and preferences, but they are also more accepting of new ideas. There are two key elements here. First, there is a level of enjoyment that nearly everyone has for fantasy, whether it be creature specific, magic, or just the general world of a “Middle-Earth.” Second, people don’t like to say it, but humans are intrigued by violence. Part of you enjoys the flutter of your heart when tension rises and emotion overtakes judgment. You cheer for some characters to live and hope certain ones to die. To make a long story short (too late), I felt I could ease adults into my world and attach them to characters, before dousing them with fantasy, and then be more violent and expletive along the way.

Q: Mischief and Mayhem takes readers into a very complex world. When you began writing, was it more around character development, or world creation?

Nicholson: It was always world building, which is weird to say now that I’m nearly finished with Part Two and I know and love the characters to death. I knew who my characters would be and their general attitude, but until you put the letters on the page and make words come out of their mouths, you only have a description. I started writing with the idea that I’m going to let my characters evolve on their own and “grow into themselves” throughout the story. I said earlier that I wanted to escape into the world, not necessarily walk with the characters. The Faerlands is only one landmass in this world, with many others hinted at. I felt that the reader needed to see what trees and foliage surrounded them in the Woodlands. They need to smell the sweet aroma of honeysuckle and shiver during a cold breeze.

Q: Mischief and Mayhem introduces readers to a lot of new characters. Which one is your favorite? And why?

Nicholson: This is difficult, because I know more characters and more importantly, who dies (insert maniacal laugh). My favorite is by far Ophelia. In short, she’s a little badass. She’s far stronger than she realizes, but it comes at a great cost. Her power forces her to relive tragic moments and nearly drives her insane. I cannot even count how many hardships I’ve forced upon her, yet she always has a positive outlook and refuses to let any loss or wrong doing define her. It hasn’t been shared on socials yet, but I had my most recent tattoo be of her. Soon it will be done with more imagery from different scenes and fights. All in all, I couldn’t think of a better character’s mindset to tell most of the story from.

Q: Mischief and Mayhem is the first book in The Faerlands Chronicles  series. When will the next one come out, and what can readers expect from it?

Nicholson: Hopefully soon! My goal, as I’m sure is any debut author’s, is to reach a point that I’m constantly producing content. I moved to the Outer Banks at the beginning of the offseason and right when I began the publication process, knowing that I would have a lot of free time. I’m pleased to say that in the past six months I’m just over the three-quarter’s mark with Part Two and it is full speed ahead. As far as expectations go: more story. Part One ideally sets the stage of the world and lays out what surface issues are occurring. Part Two brings in a third storyline, following the forces in the Meadows as they defend against the invaders. It also follows the antagonists more, learning a little about their story. Overall, Part Two is a hurricane of emotion, violence, and mysticism. More races are introduced and understood, along with even more fantastic creatures!

Q: What do you want the reader to take away from Mischief and Mayhem?

Nicholson: I want them to take away the concept that even when the world looks bleak and empty, you only need to turn the page and find a silver lining. Our characters face far worse problems than any of us could imagine in day to day life, yet they endeavor to persevere. I know it’s cliché, but our issues are always minute in the grand scheme. Sometimes we just need to see others, whether they are fictional or not, overcome something worse and inspire them to do better and enjoy life for what it is. TLDR…don’t wait to be happy, go seek it.

S. D. NICHOLSON is an emerging author with a focused genre of adventure and fantasy. Growing up as a child, he exercised his vivid imagination, creating adventure games for his friends and family. Sam went back to these roots in his first novel, Mischief and Mayhem, the first book in the The Faerlands Chronicles series. Nicholson graduated from Florida State University in 2017 and moved to Virginia Beach, where his imagination took hold once more and led him to pursue turning an idea into his first book.

Raising Rainbows :My Colorful Life as a Mother of Children on the Autism Spectrum by Cynthia Dixon a book on Autism Awareness