In Your Dreams; Book one in the ALDAYA Series written by John Swan

When I first received this book I was told it was the first of a six part Epic that would all be released over a period of 18 months. A bit ambitious to say the least for a first time Author ( John Swan). After reading the Dedication page I’m thinking he just might do it. Anybody that dedicates a book to Stevie Nicks yes THAT Stevie Nicks can’t be all bad. Which brings up an interesting Question.   In Your Dreams ?  Isn’t that the title of one of her Albums ? Interesting… 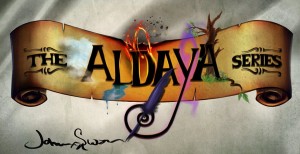 I’d like to start by saying I enjoyed this book immensely. Over the years I’ve become a fan of this Genre starting of course with the Hobbit and then Fellowship of the Ring Series. Among many others I’ve read both  The Belgariad by David Eddings and The Wheel of Time Series by Robert Jordan.What all these have in common among other things is the Protagonist. I love an underdog a the Reluctant Hero,The Anti-Hero. They go by names like Bilbo,Frodo, Garion or my Favorite trio of Rand , Matt and Perrin . I now have someone else to throw into the mix and her name is…

The necessary Prologue (From the Scrolls of Bronwyn) tells us of ” A world not much different than our own” (except of course for the magical spirits running the joint) we learn of the creation of their world and what went wrong.Before I go further you know I don’t do “Spoilers” here but it goes like this

In a time before ours,when the universe was much younger, a great civilization lived upon the surface of an infant world not much different than our own.It was tuck away in the same distant arm of the galaxy,with it’s twin moons shining unblemished in the night sky, and it’s surface full of spirits both great and small.Of these, some were strange and timid and others bold and strong.

Now in my words

So to start this is the classic Good vs Evil. Everyone is living in a nice peaceful world for years.The “good ” spirits , the ESME are watching  their children thrive on this planet and that all they want.Enter the bad guy Izman . Things go terribly wrong ,a power struggle leads to war the good guys win and Izman is imprisoned. END OF PROLOGUE

Fast forward 1,000 years give or take a decade and that’s where our story begins.

I must admit I thought the first two chapters were a bit slow while introducing one of the main characters.But it picks up quickly.High Lord Eolan a man haunted nightly by a Face he does not know in his Dreams. The face is of a young blond girl with purplish eyes.

Eolan must leave his castle on a diplomatic mission to another city. It turns out his journey does not quite turn out as expected.

Miles away in the small town of Slaidburn a young girl is making her way on her own working in the kitchen of the local Inn. Just so happens this girl has blond hair and purplish eyes and is also haunted by nightly dreams .The girls name is Mim, and she is forced to leave her home on a journey of her own.

Do the two meet?

What would a poor kitchen girl have to do with a Royal Lord?

How do the Magical spirits that created the world fit into all this?

Through  excellent writing  and storytelling  John Swan has created a world of magic,intrigue and suspense . Filled with well formed thought-out main Characters as well as the supporting cast.With characters you’ll soon come to care about. I think the first time author has created the beginning of an actual “epic” here. I look forward to the next five books in the series. The story can go in many directions and it will be fun to see where our author goes with it. The world he created here is that of a middle age type society yet with flying machines and other more modern type inventions.

Much like the Books I eluded to before the main character (MIM) is sought out and hunted by an evil creature. Mim does not know why but she knows she must flee not only for her own life but as not to endanger those around her. Like the classic anti-hero she finds the strength and courage to venture on lost and alone knowing very little of how or why she is in such a fix.

For anyone that likes this genre this book will not disappoint. I think John Swan accomplished exactly what he set out to do and that would be to write a truly enjoyable well written  fantasy with a story that moves along very nicely and make readers wanting more.

The War of Words by Amy Neftzger : A Book Review