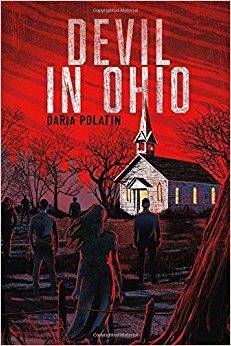 Making headlines in the New York Times and Los Angeles Times for her work as a TV screenwriter and playwright, Daria Polatin is gearing up to release her debut heart-pumping novel, Devil in Ohio (November 7th/Macmillan). Based on a true story surrounding a dangerous cult in the U.S., Devil in Ohio tells the unbelievable true tale of a young woman desperately trying to make a new life for herself-even if it means ruining someone else’s.

In Devil in Ohio, when fifteen-year-old ‘Jules Mathis’ comes home from school to find a strange girl sitting in 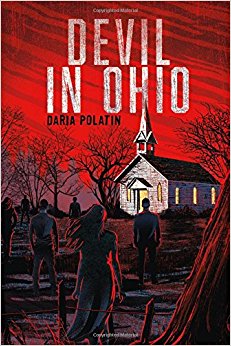 her kitchen, her psychiatrist mother reveals that ‘Mae’ is one of her patients at the hospital and will be staying with their family for a few days. But soon ‘Mae’ is wearing’Jules’s’ clothes, sleeping in her bedroom, edging her out of her position on the school paper, and flirting with ‘Jules”s crush. And ‘Mae’ has no intention of leaving, then things get weird…’Jules’ walks in on a half-dressed ‘Mae,’ startled to see: a pentagram carved into ‘Mae’s’ back. ‘Jules’ pieces together clues and discovers that ‘Mae’ is a survivor of the strange cult that’s embedded in a nearby town. And the cult will stop at nothing to get ‘Mae’ back…”

1. Where or how did you come up with the idea for Devil in Ohio?

I was interested in writing about what happens to people when they’ve been in isolated communities, and wrote a TV pilot about a cult. Then when I heard the true story of a teenage girl who escaped from a satanic cult and moved in with her psychiatrist’s family, I had to tell it. A novel seemed like an exciting way to write that story, and the true events became the inspiration for Mae, Jules and the Mathis family. Devil in Ohio explores the timeless struggle between good and evil, and the strength it takes to overcome the adversity of your past.

I always approach the story by what is going on internally for the characters—what they are thinking and feeling, what drives them—so I do work “inside-out” in that sense. But I also look at the big picture. Before I start a project, I map out the story so I know where it’s going, and what milestones I need to get to along the way.

I loved writing Mae’s struggle with whether she’s evil or not, and if she’ll ever be truly free from the cult. I also really enjoyed exploring how complicated Jules’s feelings are toward Mae as she learns about Mae’s past, and how confused that makes Jules feel.

4. Is anything in Devil in Ohio based on real life experiences or purely all imagination?

The book is based on a true story, the background of which I will keep under wraps, but a lot of what happens in the book actually occurred. I took artistic license in order to fill in the blanks and flesh the story out in a way that worked for a book.

My favorite quote is from psychologist Carl G. Jung, who said, “Until you make the unconscious conscious, it will direct your life and you will call it fate.” I love working with the idea that people do things driven by their deeper feelings, whether or not they’re aware of them.

Some of my favorite authors are Jane Austen, Zadie Smith, David Sedaris, and the playwright Anton Chekhov. I also like Shakespeare a lot, because he told such epic, dramatic stories.

My favorite factional character is a tie between Nancy Drew and Lisbeth Salander, from Girl with the Dragon Tattoo. They’re both women who are relentless in getting to the bottom of a mystery, and I love how passionate and persistent they are.

I’m currently writing for the upcoming Amazon TV series “Jack Ryan,” starring John Krasinski. I’m also working on a new novel about the loss of a parent. My father died recently, and it was a profound and challenging experience. I’m exploring the story of a young woman who loses her mother, and ends up escaping to Japan and landing herself in an emotional mystery-thriller-adventure. It’s a down-the-rabbit-hole, Alice in Wonderland journey of loss and transformation. I’m also doing rewrites on my new play, Palmyra, about a young woman who joins ISIS, which will be presented in New York City this winter.

It’s hard being told that I can do better. It makes me feel like I didn’t try hard enough, or give it my all, and that bothers me the most. I always try to do my best at things—then at least I know that I tried, even if something doesn’t turn out the way I want it.

When people relate to my work that makes me so happy. I love when readers/viewers identify with aspects of a character or storyline, or are moved by it. To me, that’s the best compliment I can receive.

Devil in Ohio is my first book so luckily not yet!

I’m just starting to hear from readers. I love when people share their experiences of the book with me, especially when they tell me they couldn’t put it down, or stayed up late to keep reading. That’s my favorite experience as a reader—not being able to put a book down—so I love that my book is giving that kind of enjoyment to others.

I think being pulled down the rabbit hole on a journey with an interesting character makes for a compelling story.

15. I think I know your answer but, what’s more important to you Characters or plot?

To me, character drives plot. People do things for a reason, whether they are aware of that reason or not. That said, plot carries the journey of the reader through the book. So they both go hand-in-hand, but I think it begins with character.

When I’m not writing I like to hike, read, watch movies and TV shows, cook, make up recipes, hang out with my friends. I also like going to dance classes. I do work quite a bit though, so I am writing a lot of the time!

17. How about a snippet from your book Devil in Ohio that will hook a prospective reader and make them want to read your book.

AS SHE PEELED THE CATATONIC GIRL’S HOSPITAL GOWN off her back, the nurse’s face paled: red lines, brimming with blood, had been carved deep into the teenage girl’s porcelain skin. The congealed liquid was starting to tighten, crack. The maroon lines were precise, stick-straight. There was no way the girl could have done this herself.

This had been done to her.

The nurse gazed at the nest of lines. The slices formed a five- pointed star. An upside-down one. Around that, a circle was engraved.

Slowly—carefully—the nurse replaced the thin cotton gown. With an unsteady hand she pulled out her cell, stepping backward across the linoleum as if repelled from the girl’s damaged body. Cell phones weren’t normally permitted for use on the hospital floor, but this seemed like an emergency.

When the person on the other end of the line answered, the nurse whispered fiercely—

Dedication is the most important tool, which equals hard work and a willingness to learn. Writing takes so much time and effort. Writing is rewriting… and rewriting… and rewriting. You have to put in long hours, listen to feedback, be willing to scrap old ideas, and push yourself to learn, grow and improve on a daily basis. It’s a lot of work but it’s very rewarding.

I’ve been writing stories since I was three years old. I used to write and illustrate my own books, and also compose musicals on the piano. I started writing plays in high school because I loved theater, and studied playwriting in college at Boston University, as well as in graduate school at Columbia University. I started writing for TV when I moved to Los Angeles a few years ago. I was drawn to writing a novel when I heard the true story of a young woman who escaped from a satanic cult and moved in with her psychiatrist’s family, and thought a book was an exciting format to tell that story. So yes, I have always wanted to be a storyteller, even though it’s taken a few different forms.

I hope you enjoy reading Devil in Ohio!

Having solidified herself as a leading TV screenwriter with her recent work on Hulu’s “Shut Eye” and “Guidance,” Daria is currently writing for the  Amazon TV series “Jack Ryan,” starring John Krasinski. For the stage, Daria’s plays include Palmyra, In Tandem, Guidance, That First Fall, D.C., A Fair Affair and The Luxor Express, inspired by her father’s life growing up in Egypt. Her work has been produced at The Kennedy Center, Actors Theatre of Louisville, Naked Angels, Ensemble Studio Theatre NY, Golden Thread Productions, Noor Theatre, Malibu Playhouse, Cape Cod Theatre Project, in London, Los Angeles, and Hong Kong.

Netflix is teaming up with author and producer Daria Polatin to adapt her novel titled Devil in Ohio, which she released in 2017. Based on true real-life events, the limited series will tell the story of a girl who escaped a satanic cult.

The lead star of Netflix’s Devil in Ohio will be Emily Deschanel who is best known for her role as Temperance Brennan in Bones as well as Angela in Animal Kingdom. Deschanel stars as Suzanne, along with Sam Jaeger as Peter, Gerardo Celasco as Detective Lopez, Madeleine Arthur as Mae, Xaria Dotson as Jules, Alisha Newton as Helen and Naomi Tan as Dani.

Cutting her teeth working on Showtime’s “Weeds” and “Dexter,” Daria had always known she wanted to move into the creative field when she began writing and illustrating stories at the age of five. Having a worldly upbringing via her parents helped to cultivate her creativity. Daria attended Boston University where she majored in theatre, and continued her education at Columbia University, receiving her Masters in playwriting.

When not writing her next novel, Daria focuses on growing The Kilroys, an LA-based advocacy group she co-founded that promotes gender equality in the American Theater that she helped to co-found. Daria also has a long list of awards tied to her work, including Kennedy Center/A.C.T.F. Best One-Act Play, and the Bette Davis Foundation Award for Excellence in Theater.www.dariapolatin.com

Disclosure of Material Connection: I have not received any compensation for writing this post. I have no material connection to the brands, products, or services that I have mentioned. I am disclosing this in accordance with the Federal Trade Commission's 16 CFR, Part 255: "Guides Concerning the Use of Endorsements and Testimonials in Advertising."