Forget Me Not by Allison Whitmore a Historical Romance novel 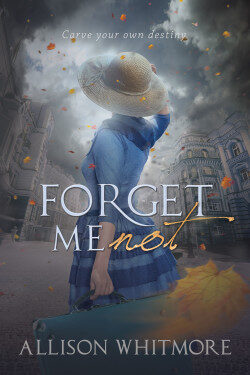 Theodora “Teddi” Donovan and Calvin Wynne have always hated each other. They didn’t have a choice after Teddi’s bootlegger 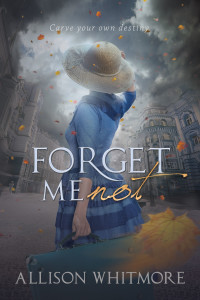 father killed Calvin’s and left them both orphaned. The scandal has fueled gossip in quiet, quaint Brookhurst, New York, for over a decade. When a friendship develops between them as teenagers, they are ridiculed and shunned by the strict society that dictates life in their town. As they grow older, friendship turns into love, and Teddi and Calvin have to choose between their future and the specter of their past. Spanning continents and decades, Forget Me Not is a coming-of-age story about truth, self-reliance, and the freeing power of love.

Find it on Amazon

Excerpt:
Calvin heard a strangled cry float into the hallway from her room. “Calvin,” she uttered, following an onslaught of wretched coughs.
Without another thought, Calvin rushed toward the door to Teddi’s room but was stopped by Ben’s hand clutching his elbow. “Don’t.”
Calvin ripped his arm out of Ben’s grip. “Don’t make me hit you, Ben.”
“Young man, please leave!” Mrs. Donovan’s harsh voice echoed down the hallway, causing him to shudder. “You’re not wanted here.”
“But—”
She stepped closer to Calvin with her hand raised and her eyes narrow. “Go now, or I’ll report you,” her voice came out in a soft hiss. “You’ll never see the light of day once I’m through with you.”
Calvin heard Teddi’s continuous cries and shook his head furiously. “No,” he said, looking past the old woman through Teddi’s half-cracked door. “She needs me.”
“She doesn’t need you. She needs a doctor. She needs her family. Because of you she might die.”
“That’s not true,” Calvin said, forcing down the sob that had risen in his throat.
“Leave now, young man.”
Calvin fisted his hands together and looked the old woman firmly in the eye. “I’ll be back tomorrow.” He glanced in the direction of Teddi’s bedroom one last time before forcing his suddenly heavy feet toward the stairs past a sneering Ben Holliday. He would be back.

About the Author
Allison Whitmore is a classic Hollywood fan, lover of great books, and a self-proclaimed “grown up” fan girl. She and her two good 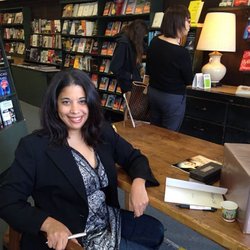 friends, Erin Virginia and Grace Arden got together and wrote The Lost Heir. They wanted to bring a story about a kick ass female empath to life, and they did. Allison is also the author of the well-received historical romance, Forget Me Not, a coming-of-age set during the 1930s and 40s. Allison loves to hear from fans so feel free to find her at website www.allisonwhitmore.com.