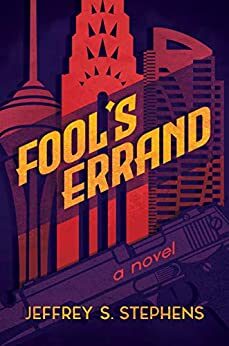 Jeffrey S. Stephens        Who hasn’t ever done a fool’s errand at some time in their lives? Jeffrey S. Stephens has written a  novel  that will stick with you and may even bring on some of your old family memories.  It is a story of a son who is remembering his father in a flattering yet unflattering way. Jeff Stephens does a great job of building the characters in this first person narrative.  Jeffrey writes a story that lets the reader get to know the characters along with their flaws through their various adventures. 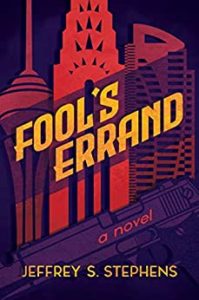 ‘Fool’s Errand’ is a story that starts out with a mystery of a letter that the father wrote shortly before his death that started in the fathers younger years in the military during World War II.  After reading this letter the son wants to solve the mystery but has many questions.  These questions lead him on an adventure cross country and international with many situations and a forming relationship. This is a story of communication and miscommunication.

With various twists and turns the author takes you on a great ride all the way to the fantastic ending.  ‘Fool’s Errand’ would be a good book for say social workers and/or counselors who deal with family issues and members looking for answers to work through various issues.  Jeffrey is a very illustrative writer. Right from the start with the reading of the letter   I could see the main character reading it along with scenes during the wedding, the trip to Las Vegas and then on to New York and to Paris.  He also describes in detail the squabbles that the main character has with some Mobster characters of the past.  Questions will be answered, but not the way you may think.

John “Blackie” Rinaldi had been dead for more than six years before his enigmatic letter surfaced. In it, Blackie described a cache of stolen money — hinting at its origins and its whereabouts — and prompting his son to embark upon the journey of a lifetime.Fool’s Errand from Jeffrey S. Stephens takes readers on a fast-paced quest for riches that skillfully explores the complexities of father-son relationships through the eyes of Blackie’s son, who feels compelled to unravel the mystery his father left him to solve. Why hadn’t his father simply told him about the hidden treasure before his death? It’s just one of many questions as Blackie’s son follows the letter’s trail of breadcrumbs from the mean streets of New York to the Las Vegas Strip, and ultimately to the South of France. Along the way, he is confronted by dangerous mobsters, dishonest relatives, suspicious friends, a mysterious woman . Also the risks of a journey his father may or may not have planned for him. Each secret revealed leads to more questions, as his life-altering pursuit for answers takes thrilling twists and perilous turns until the very end.   Fool’s Errand is poignant and entertaining, humorous and exciting, romantic and mysterious — an adventure that convincingly explores the dynamic between a father and son, and the events that will eventually lead a young man to discover both the treasure and himself.About the Author

Discreetly Yours by Stephen Murry