Tiffanie DiDonato, the author of Dwarf: A Memoir, has been “more than a little tired of all the terms people use to define me.” 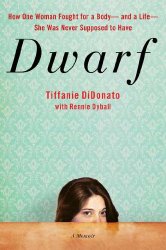 Tiffanie writes “I do not consider myself a dwarf and never have” because “Yes, technically I am a dwarf. But while it might be the title of my book, it does not define me, nor does it precede my name”, so “Please, just call me Tiffanie. ” Her condition, diastrophic dysplasia, is a very rare type of dwarfism that not only made her arms and legs short but gave her joint deformities (initially she couldn’t even touch her own ears). Not expected to grow beyond three feet eight inches, Tiffanie became four foot ten inches tall due to bone-lengthening surgeries during her childhood and adolescence, surgeries that were severely taxing and painful.

Because of her condition, Tiffanie had different goals than most of us, for instance, “I desperately wanted to take out the trash. Of all things! I fantasized about picking up the burgeoning white bag with the tie top and walking it out to the garage. I dreamed of reaching the fourth shelf in my refrigerator, the faucet, the light switch, and the coffeemaker. I wanted independence, freedom from the tools and devices I depended on for a normal life. And I didn’t think twice about sacrificing to get it.”

Tiffanie’s mother and father did not make her feel that she was different, and it wasn’t until she was trapped in the bathroom at school in first grade that “I waited for someone to rescue me. With my back to the wall, I slid down to the floor…. I knew something was not right. It was the first time I remember feeling different, even if I didn’t understand why.” Later, a girl named Mandy tells Tiffanie that “I think you’re adopted. You have a different mommy and daddy somewhere, because you don’t look like the ones you live with. They’re so much taller than you,” and Tiffanie worries about having to go and live with new parents someday in the future. She asks her mother, “Are you happy about me?” and her mother answers “I love you more than all the stars in the sky” and “You may be little, you may be short, but I love you, because you’re mine,” and Tiffanie believes her.

But, “From keeping my legs straight to correcting my clubbed feet to closing a small cleft in the soft palate of my mouth, I’d had literally dozens of surgeries since I was ten months old, and I’d battled arthritis for as long as I could remember.” Bone-lengthening was a “grueling, painful process” and Tiffanie experienced many years of post-surgery recoveries. Before this she used salad tongs to “reach, grab and squeeze” items like socks and underwear in order to pull them on and off so that “I could also do what many would never consider to be a problem. With tongs, I could accomplish what average-size people understandably take for granted.” Because her mother wanted her to have the bone-lengthening surgeries (whereas her father didn’t want her to go through so much pain), Tiffanie sometimes stayed home and was tutored, and she turned the pins in her legs “at eight in the morning, at noon, at six in the evening and finally at midnight for a total of one millemeter a day” so that one day her legs would actually be longer. Eventually “I felt the shape of a rounded doorknob in my hand, as opposed to the handles my father installed at my height. It was firm and solid. It felt good. It was a whole new world for me, and I felt that I’d earned it.”

Tiffanie wanted to shop at “real” clothing sores, not just those for little girls because they had the only sizes that she could wear. When wondering whether she was pretty, her father told her that “Pretty will come through being happy.” When Tiffanie volunteered for an after-school group, Ms. Hart told her, “Look, I don’t know what kind of disease you have, but you’re obviously a dwarf…. Maybe sports medicine isn’t the best thing for you to do. Maybe you should find another activity”, and Tifannie was shocked, being the girl who had always wanted to be more than eye-to-eye with her German Shepherd and not to “come up only to my friends’ hips” and not realizing that some people would immediately view her as inadequate.

Much like the Little Mermaid in the fairy tale who walked on strange and new stinging legs for her Prince Charming, Tiffanie had to endure so much more than most of us do while growing up. “When I lowered myself to the floor, the pain in my legs was immediate. It was sharp, like a million jagged pieces of glass slicing through my muscles. I felt the blood rush down to my legs and swirl inside my feet. I felt like they were going to explode from the inside out. Part of me wanted them to explode so they wouldn’t be there anymore.” But Tiffanie persevered, telling us that “It’s hard to explain the difficulty of forcing yourself to do something that you know will cause you pain.” Kids in her high school all “took the little things for granted. The ability to reach the combination lock on their lockers, the dollar slot in the soda machines, the sewing machine pedal in design class, and the ability to climb the bleachers – no one appreciated any of it. My classmates didn’t have a clue what it was like not to be
able to access these everyday things.”

Dwarf is the heartfelt story of a woman happy to have become like everyone else (with her own Prince Charming, Eric, at first a military pen-pal and then later her husband). It’s a story of those who befriended Tiffanie, including her friend Mike, who was very popular in high school but chose Tiffanie as his friend. We read about Tiffanie’s stay in Texas (when her mother joined the military), and the girls in her college sorority (at a time when Tiffanie first lived away from her parents and started to have a “normal” life). We read about her devotion to Papa (her grandfather), who loved the songs of Frank Sinatra, and Tiffanie’s deep loyalty to her entire family and especially to her mother, who taught her to fight and to be strong. Dwarf is about an outstanding woman who chose not to live her life in the shadows (in a world that would never adapt itself to her needs) and so worked hard to (both literally and figuratively) transform herself.

Music Audio Stories from the folks at Busy Bees Publishing

SOUS VIDE cooking? What is it ?