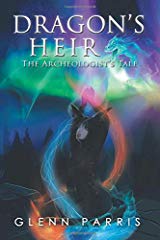 Glenn Parris has written a story that is full of description and imagery and very vivid as illustrated by the cover art.  There were many scenes in the novel that struck my imagination for I thought the ‘aliens’ were looking like cats.  On the following pages starting on page 36, the use of technical/scientific terminology, as in the term ‘pseudopodia’ and ‘near-spherical and again on page 38 using the italics that describes the general issues of the story even in the beginning.  Again, on page 127, the use of medical terms ‘neuro-synaptolyosis’ to explain the physical and mental differences of all the different species in the story.  On page 152, this was about learning how to communicate with all.  On page 168, this was when ‘humans’ had more of an impact on the story and learning to keep communications open, if I read it right.  On page 254 the italics “All these Jing Pen (human beings) for it describes what kinds of drinks ‘we’ desire and Vit Na compares us to them.  On page 284, the question that is raised that fits all cultures is “Do you root for the underdog?”  for we all ask no matter ‘human’ or ‘alien’.  On page 295 this was when further comparisons were being made between us and them and finally on page 388 a good rule to follow in any service by a ‘country’ or ‘world’ is “You don’t win a war by fighting every battle tooth and claws.  Skirmishes don’t count for much in the course of the Alom.”  Fighting war is also a mental strategy idea.
Glenn Parris has written a story that is purely imaginative and fun to read just to see how he compared his characters to each other in the story. This is a good book to teach about diversity and promote literary discussions on various topics of society.
Dragon’s Heir The Archeologist’s Tale

Glenn Parris has practiced medicine in the Northeast Atlanta suburbs for more than 25 years. He’s been writing for nearly that long. Originally from New York City, Parris migrated south to escape the cold and snow and fell in love with Southern charm and Carla, his wife of 27 years. He now writes cross-genre books in medical mystery, science fiction, fantasy and historical fiction. The Renaissance of Aspirin, a Jack Wheaton medical mystery, was his debut novel
Tweet
Spread the love

100 Great Children’s Books to read in a Lifetime