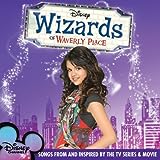 With the show recently ranked as the No. 1 TV series for kids, anticipation for the “Wizards of Waverly Place” film and soundtrack is running high. The CD includes four new songs performed by series star Selena Gomez, including “Disappear,” the rock ballad “Magical,” the show’s theme song “Everything is Not as it Seems” and a new version of Pilot’s 1975 Top 10 Hit “Magic.” The CD features exclusive behind-the-scenes interviews with Selena, plus her all-new music video.

We are excited to offer fans of Wizards of a Waverly Place a chance to win the soundtrack CD for the first feature film based on the hugely popular Disney Channel series.  In order to win, simply follow the guidelines below to enter and check your email after the winner is drawn on August 22nd!

TO ENTER: Leave me a comment telling me why you’d like to own the Wizards of Waverly Place soundtrack

For another chance to win, visit our Music Reviews partner and enter their Wizards of Waverly Place soundtrack CD giveaway