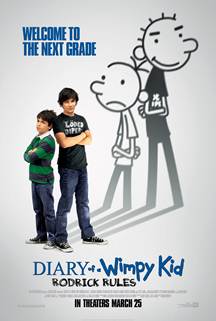 Diary of a Wimpy Kid comes to theaters this Friday March 25th.   Have you read the books with your kids yet?  If you and your children are Wimpy Kid fans , we have a couple of giveaways you won’t want to miss!

In this sequel to 2010’s surprise hit, Greg Heffley, the kid who made “wimpy” cool is back in an all-new family comedy based on the best-selling follow-up novel by Jeff Kinney. (Kinney’s Wimpy Kid” series has thus far sold 42 million books.)  As he begins seventh grade, Greg and his older brother – and chief tormentor – Rodrick must deal with their parents’ misguided attempts to have them bond.

CALLING ALL PARENTS OF A  WIMPY KID

Enter Parade’s Wimpy Kid Sweepstakes for your chance to win an exclusive experience for your child. One lucky kid will receive a school cafeteria takeover, private screening of Diary of a Wimpy Kid: Rodrick Rules with the cast and author Jeff Kinney and a one-of-a-kind self-portrait ‘Wimpy Kid’-style!  Did you know Wimpy Kids has a website too?

ONE WINNER WILL RECEIVE:

to enter: comment why you are a Wimpy Kid Fan.

Vote for Bookroom Reviews for Top Product Review Blog.(3 entries because I am bribing and begging ya for voting for me!)xox