Calling all Dinosaur Train Fans! Everyone’s favorite dinosaurs are making their way to the city for Dinosaur Big City, a one-hour DINOSAUR TRAIN movie airing on August 22 on PBS KIDS (check local listings). Families can join Buddy and his adoptive Pteranodon family on a pre-historic adventure as they gather all their theropod friends to travel to the big Theropod Club Convention being held in Laramidia, the “Dinosaur Big City!”

My children, ages seven and twenty months, are glued to the TV screen when Dinosaur Train comes on. We are picky about what we allow them to watch, but PBS is on our “yes” list. Every episode, they’re learning about science,and paleontology in fun and engaging ways. The PBS/Dinosaur Train website has tons of information and resources to share with your children to enhance their learning experience. That is why we love PBS!

DINOSAUR TRAIN’s second season will focus on exploring the outdoors and natural phenomena, and will feature “Big Dinosaur Week” and a special based on the fan favorite “Dinosaurs A to Z” song.

Buddy and his Pteranodon family embark on a journey on the Dinosaur Train, gathering all their theropod friends together to travel to a really big Theropod Club Convention, which is being held in Laramidia, the “Dinosaur Big City.” Among the travelers is King Cryolophosaurus, a singing theropod who is more than a little nervous about giving a concert in front of his biggest audience ever in the Big City. Once the Dinosaur Train arrives in Laramidia, Buddy and the Pteranodon family explore the crowded “dinosaur metropolis.” At the Theropod Convention, the kids reunite with Annie Tyrannosaurus and her parents Delores and Boris, and they all meet the multi-horned mayor, Mayor Kosmoceratops. In the end, Buddy and Tiny help King Cryolophosaurus overcome his stage fright, and he wows a large dinosaur audience when he sings his new song, “Whole Lotta Theropods” at the Convention.

The movie will also be released on DVD on August 23 by Paramount Home Entertainment. The DVD includes the Dinosaur Big City movie and four bonus episodes of DINOSAUR TRAIN, as well as interactive games, coloring pages, a dinosaur reference guide and information for parents. The DVD will be available for the suggested retail price of $14.99 U.S./$15.99 Canada. 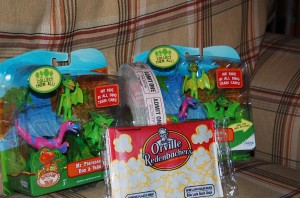 You can even throw a Dinosaur Train party with your child’s friends. PBS sent us a package with some great ideas and I wanted to share them with you.

You can make cheap but cute party bags with toys from the dollar store.  Add some popcorn and movie tickets to win prizes (like Dinosaur Train figurines).  I guarantee your party will be a hit! Make sure to follow PBS on Facebook for more fabulous ideas.

*I follow all FTC rules and requirements and all my opinions are honest. The review and giveaway product were provided by the business or PR agency.