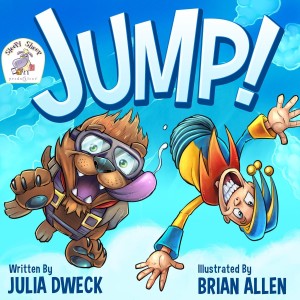 About the Book:  JUMP:  Jack, his name is!  Jack got ready to take his thousandth jump, but he was nervous as his heart began to Thump!  He tightened his coils, he sank and was waiting for the music to crank…but all of a sudden, Jack jumped right of out of his box!  Jack could not believe this.  This wasn’t good.  Jack was a broken toy and worried that he’d be trash!  But wait…his box-or his home was gone?  Where could it have gone??  Jack-a broken toy was lost and was determined to find his box!  He didn’t want to end up as a piece of trash!  He hopped and jumped around the bedroom out into the hall..over hula hoops, some marbles and some solider troops!  He was not so sure of this world outside of his box.  Before-he was safe in his cozy little box, but now he is alone in the big house!  Oh No, he ran right into Barker, the dog!  He heard the thumping of a tail and before a sniffing snout revealed, he raised a wrapper as a shield.

But wait, this dog Barker isn’t so bad! Jack explains to Barker that he needs his box to jump!  Barker wants to show Jack all about the outside world and would teach Jack how to jump outside!  (Basically is telling Jack-forget about your box right now!)   Jack did not know what this new adventure would be like….but he took a leap of faith and wait he was having fun!  Barker and Jack went on quite the adventure!  Jack jumped over a swinging jump rope, jumped so high on a trampoline and the two saw many other things on their great adventure!  Does Jack find his box and does he want his box back?  Read this book and find out!

Review:  This book is said to be aimed at kids to 4-8.  Kids will get a kick out of this box and laugh in delight at Jack’s adventures with Barker the dog!  The illustrations are very colorful, bright and detailed!  I love the expressions on Jack and Barker’s faces as they sour through the air, jump and hop along in the outside world.  I also like like how the illustrator showed the scared look on Jack’s face when he realized that his box was gone!  The pictures add very much to the book and enhance the storyline and will delight any child!  The storyline is beautifully done in a rhyming style with such powerful adjectives and full of descriptive words!  The author also does a good job at getting her message across to kids!  The unknown may be scary, but take a leap of faith and you will find that the unknown world or new experience is quite exciting, filled with new people and then you get to try new things!  This book also teaches a lesson or two to adults as they read the story with their kids.  How many times as an adult are we fearful to start a new job or move to a new house?  We take the leap through the hoops and we find that the change or world is an exciting place with many new and exciting people and experiences!  I also like how the author includes facts of animals, rockets or things of how they can jump or how they can leap so far!  The book also is neat because after the story, there is a section that has questions for the child to answer for them to recall what he or she has read by unscrambling words of where Jack and Barker jumped over!  Also included after the storyline:  questions that will help your child recall the setting, characters and plot of a story.  Younger kids are just learning how to read and are just learning about what the plot is, setting is, who the characters are and if the book is fiction or non-fiction.  The author also gives the child a challenge of writing about his or her own amazing jump and has the child include two characters, a setting, a plot and a solution!  Thinking about these things and writing their own story, the child will build on his or her own beginning writing skills!  The book has a great lesson, cute plot, cute characters, great pictures: which equals a great book for any child!