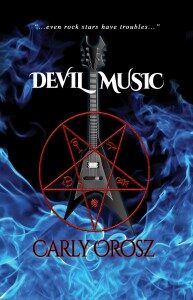 About the Book – About the Author – Prizes!!!

About the prizes: Who doesn’t love prizes? You could win one of two $50 Amazon gift cards or an autographed copy of Devil Music! Here’s what you need to do…

That’s it! One random commenter during this tour will win the first gift card. Visit more blogs for more chances to win–the full list of participating bloggers can be found HERE. The other two prizes will be given out via Rafflecopter. You can find the contest entry form linked below or on the official Devil Music tour page via Novel Publicity. Good luck! 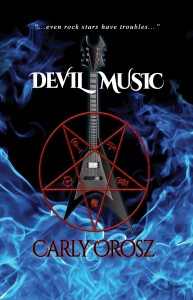 About the book: Cain Pseudomantis leads a miserable life. Bound to the mortal world by a powerful spell no demon could hope to break, he must obey his human master’s every command or face harsh punishment. He finds solace in the rock music which he listens to when he isn’t running unsavory errands for his master. Then everything changes. While on a mission in a seedy section of 1980s Los Angeles, Cain impulsively buys an electric guitar and discovers an unusual talent for music, a talent that catapults him to hair metal stardom. With three superpowered human band mates and his beautiful girlfriend Michelle by his side, his life starts to look a lot better. But Cain soon finds that even rock stars have troubles. The crusading televangelist Nathaniel Breen—who happens to be Michelle’s father—accuses him of turning the city’s youth to Satan worship. Meanwhile a mysterious killer known only as the Engineer terrorizes the Los Angeles rock scene with a series of brutal murders. When Cain and his friends attempt to unmask the killer, they discover a deadly secret that could cost Cain his hard-won freedom, and possibly his life.Get Devil Music through ,Amazon

,Barnes and Noble or iTunes.

In the word’s of Mick Jagger…

“Please allow me to introduce myself I’m a man of wealth and taste I’ve been around for a long, long year Stole many a man’s soul to waste”

That ladies and gentlemen is exactly what I think of when I hear the term “Devil Music”. I think of a demon as an all knowing evil , mean twisted creature  out to create havoc everywhere he goes. Now I guess I’ll think of a guy by the name of Cain.Author Carly Orosz  introduces us to her own idea on the subject. The hero of her new book is a demon (can we call a demon a hero) “Cain”. From the first pages you feel Cain is more of a victim than anything else. He’s abused by his “Master” does not seem to control his own destiny. So much for the all knowing all powerful.But after a while he does start to become his own man so to speak.Cain’s story involves a little mystery,suspense,murder and of course a little magic with a  bit of romance mixed in.I did however guess roght about the Murder part.

It’s a creative book with a few  interesting twist and turns. The focus on Heavy Metal makes you wonder about the real rockers back then. (always wondered about guys like Ozzie Ozborn and Alice Cooper) While kind of a fun book it was a little hard to get into.My only criticism is not necessarily the length but the absence of real meat in the first part of the book. There was not enough to grab me but I’m glad I stuck with it. It was worth the read to find out how everything comes together.It also had it’s funny moments. So my advise here is to stick with it in the beginning and you wont be disappointed in the end.

I still think he’s way to good for a DEMON

About the author: Carly Orosz lives in Kalamazoo, Michigan with her husband. She graduated from Kalamazoo College and went on to earn an MFA in poetry from Sarah Lawrence College. Her poetry has been 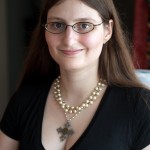 published in Wavelength Journal and SpoutMagazine. In her spare time she enjoys cooking, weaving on a hand loom, and studying the art and cultures of pre-Columbian Mexico.
Connect with Carly on her website, Facebook, Twitter,or GoodReads..

When the World Stays Inside