Clifton Chase and the Arrow of Light Jaimie Engle 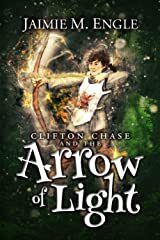 Clifton Chase and the Arrow of Light
Jaimie Engle

Do you like History, Mystery, and Humor? It’s a middle grade Historical fiction/fantasy
How about  an adventurous journey through time and space. ‘Clifton Chase and the Arrow of Light’ written
by Jaimie Engle is a story of the present helping the past to solve various issues. The main character of

Clifton is the person who discovers while at school that he has a ‘special’ arrow in his archery class that
leads him to his first mission back in time, but does not change the present time. This is an arrow that
will find Clifton when it needs to have his help. Clifton seems to be always finding a way to be in
trouble at school or at home through no fault of his own and through these missions he finds his
answers to solve is problems in a way.

My favorite part of the story other than the stories from history was the introduction of the character
‘Simurgh’ and the author uses her for the space time continuum travel and how this character makes
Clifton comfortable on his missions to solve. The illustrations at the beginning of each chapter gives a
slight clue to what the chapter is about and what the characters discover about themselves. We can do
anything that we put our minds to doing. ‘The Arrow of Light’ is a story that teaches readers how to see
the creative ways to solve whatever issue is bothering them to a point.
Jaime Engle has written a novel that children, young adult and even adult readers would enjoy reading
even if just to escape as Clifton does throughout the book

Check it out here

An ordinary boy is chosen

There were plenty of other middle schoolers it could’ve chosen. Six-hundred and eighty-six, if you didn’t count Clifton. The Arrow of Light appeared in his closet then whisked him away to a far-off land, where a dwarf and magical bird led him to two princes. He returned their arrow that he had somehow found and went home to his normal life. But the Arrow of Light had other plans. When Clifton found out that the king locked the princes in Drofflic Tower, he knew he must return to the past to protect the future. Enlisting the help of many mythical creatures and the princes’ own sister, he managed to find the reason the Arrow of Light chose him. But magic can be wrong. And history longs to be told.

Jaimie Engle is on a mission to write stories that shape you. Since she first fell into Wonderland with Alice at age seven, Jaimie has known she was meant to write magical stories. In her books, magic turns the ordinary into extraordinary and sometimes we become wiser in the midst of a dark thriller or a charming fantasy tale.