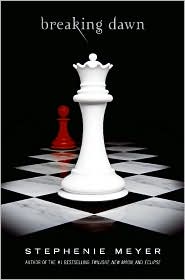 Uh Oh Breaking Dawn is getting BAD Reviews!!  So Far on Amazon out of 97 reviews here is the chart:

Don’t Read any further if you don’t want to know the Spoilers!!   Here are some of the things I found.  Granted I haven’t read it yet, and want to judge for myself, but now I am wondering what in the world is going on with all these bad reviews.  If you have read it please tell me your thoughts!!  I should be getting it this week.

After the much-anticipated wedding of Bella and Edward, the two embark on a romantic retreat that leads to the conception of an impossible half-human, half-vampire child. The birth of this hybrid leads to an equally manufactured appearance of the feared Volturi — an Italian vampire coven met in New Moon that plays as all vampires’ judge, jury, and executioner.

Bella didn’t have to sacrifice anything apparently. She gets Edward AND a baby AND immortality as a vampire. What about poor Jake–not a problem, he IMPRINTS on the baby, which I find disturbing

Bella’s power is that she’s a shield. She can put a shield around people and then mind powers won’t work on the people in the shield.   Jane’s power, for example, won’t work if you’re in the shield. And she learned that she can project her past thoughts into Edward’s head.

A Forced happy ending,   A slap in the name of Feminism,   Petition for a re-write,

First, Breaking Dawn begins with Bella remembering when she told her father, Charlie about her engagement to Edward Cullen, a vampire. Of course, Charlie has no idea that Edward and his family are vampires, or that his daughter is planning on marrying Edward and becoming a vampire herself. Surprisingly, Charlie isn’t too surprised by her announcement.

The first 7 chapters are about Bella’s wedding and honeymoon to Isle Esme, her new vampire mother-in-law’s private island. (Apparently, vampires are very rich, or at least the Cullen family is) Making love with Edward is a problem: he is supernaturally strong, and very afraid he will loose control and hurt her/bite her. Even with those risks, they somehow manage to have a decent honeymoon. Until…

Bella starts feeling funny. She is throwing up, having strange food cravings, and her period is 5 days late. But, she’s only been honeymooning for 2 weeks, it couldn’t be possible that she is pregnant, can it?? Apparently YES, she can be.

Now, this is where the story really lost its reality: vampires are DEAD. Having children should NOT be a possibility, but for Bella and Edward, a reality they will have to face, VERY soon. Bella’s pregnancy is VERY accelerated, and no one is sure what sort of child she will have, vampire, human, vampire human hybrid??

Now the point of view switches to Jacob, Bella’s best friend, who is a shape shifting werewolf. He is devastated by Bella’s marriage, deeply concerned for her safety while honeymooning, and can’t stand the thought of her a)becoming a vampire and b)being with someone besides himself. Now, Jacob and his pack have to make a decision about Bella. The Cullen family promised that they would never bite a human, and if they did, the wolves could hunt them and kill them. Obviously, Bella’s situation is NOT something the wolves bargained for: a human WANTING to be willingly bitten.

Without spoiling the ending, Twilight fans, this book DOES wrap up the story with Bella and Edward nicely. SHE DOES become a vampire

Speaking of a great Vampire Book I will be holding a giveaway of two copies of The Summoning coming up so make sure you subscribe to my feed or keep checking back!!

And check out my other book giveaways going on right now.  Look on the left hand side of my blog to enter, I am giving away a HUGE box of books to five winners!!

Magic of Friendship: Book one: How Andy-Dog & Katie-cat met by Tally Banana

My Yellow Balloon by Tiffany Papageorge