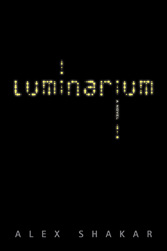 Luminarium is about the search for spirituality while trying to connect with other human beings, but within the book none of the characters sacrifice themselves for each other or even share much, and in the end, the main theme portrayed is that of revenge. This is theoretical spirituality, those searching through the joke of “Street Reiki” or Buddhist and East Indian solutions of the mind as opposed to interactions where people help one another and support each other’s endeavors. Also, the power of computers, video games, and the internet factor greatly in changing people’s lives and their futures.

Fred Brounian, our protagonist, whose brother George is in a comain the hospital and who has lost his job and his girl, answers an ad for a “Scientific Study” at NYU, and once there Mira places a helmet with wires on his head in each session, later telling him which parts of his brain have been stimulated. She espouses “faith without ignorance,” and initially Fred pursues this, also being told by his friend Manny to embrace Mu, and in Mira’s studies “the self is a conditional reflex; a needy, greedy concatenation of impulses; a position, ultimately, of ignorance.” Within his “no self, no problems” aspirations Fred even creates a computer “Prayerizer” loop that will repeat a “prayer” for you continuously online, even trillions of

times – but of course this “prayer” is not coming from your heart or your own lips, just from a computer’s repetitions. Mira extols that “….religions are the fruit of thousands of years of experimental wisdom….they’re the records of those few people in history who managed to see through this life so deeply and completely that they found the way to God.”

And yet Fred’s thoughts (mostly of his twin brother George, the person with whom Fred has seemed to “merge” more deeply and longer than with anyone else) don’t allow him access to a long-lasting relationship with his former girlfriend Melanie or his new crush Mira, or to any any modicum of happiness. He seems to live primarily in his head and in his childhood memories (like many who’ve taken up Eastern religions, where gurus are constantly trying to simplify their confabulations), even though Mira assures him that “What you and George had for all those years few people have even for a day. Most people will never know a connection like that,” even though any love story between any two strangers (which Fred and George and their brother Sam don’t seem to be able to achieve) contains far more intimacy, as does the singular night that Fred spends with Mira, of which he feels (perhaps rightfully so), undeserving.

If you Mu or “forget” about yourself or your earthly problems, they don’t really go away, as Fred finds himself on the brink of homelessness, is jobless and partner-less, and no amount of brain stimulation can even begin to mimic actual experience (at one point he sees his father and later his mother as luminous, but much more joy seems to emanate from real people in love, although Fred never really addresses this issue). In first considering this NYU Scientific Study, Fred reads that “By reproducing the ‘peak’ experiences commonly associated with spiritual awakening, this study hopes to help participants change their long-term cognitive patterns, leading to enhanced self-efficacy and quality of life. It should be stressed that these sessions will not involve religious indoctrination of any kind.” Yet when Fred is first stimulated into “merging” with an older woman that he nicknames Pincurls, it’s a stalker kind of merge, feeling what she feels but not by their mutual consent, only by his mental invasion. Subconsciously, for Fred hell is truly other people (as Sartre said that it was), and certainly (wanting his brother George to artificially experience God before he dies) the idea of God as within one’s self or within other people is never broached.

A curious, passionate and detailed work (and a tome at over 400 pages), Luminarium brings us to New York City, to Florida, and to what it’s like to be alone, but never suggests that perhaps in extending one’s own self in kindness towards another person one might begin to bridge that howling loneliness. Everyone is cut off from everyone else: Sam, working himself to death at the brothers’ video games company; Holly (the brothers’ mother) trying to “help” others with a group that participates in Street Reiki; Vartan (the brothers’ father) failing as an actor and performing magic shows at birthday parties; Mira, trying to regain her husband Lionel, lost in the 9/11 crisis; and Fred, wanting desperately to connect with others but usually only thinking about himself. Each person is immersed in the image or “visualization” of what it’s like to be with and among others, but never succeeds in actually being there. A sense of morality – another possible human bridge – is lost early on, and everyone spins around everyone else, each a separate rampant worldand planet – yet the author knows this, and conveys that technology of all kinds is prevalent in our society and may be leading us all to that loneliness, where we seek forever the last line of the book, in “our mission. Awaken our twin.”