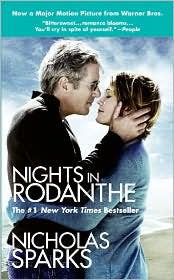 I haven’t read this book, but it is on my list to read before the movie comes out.  Watching it makes me think it is “The Notebook” for the older generation.  Just look at how the poster’s compare! I love Diane Lane too,  I thought her and Richard Gere were fabulous in their last movie Unfaithful.  And even if this movie doesn’t sound appealing to you, you HAVE to watch the trailer just to see the Inn they built right up to the ocean’s edge.  What a dream house!  If you have read the book I would love to hear if you liked it or not!  The movie is slated to come out in September 2008 and the book is available now.   A synopsis of the book is below:

Adrienne Willis is forty-five and has been divorced for three years, abandoned by her husband for a younger woman. The trials of raising her teenage children and caring for her sick father have worn her down, but at the request of a friend and in hopes of a respite, she’s gone to the coastal village of Rodanthe in North Carolina’s outer banks to tend the local inn for the weekend.
With a major storm brewing, the time away doesn’t look promising…until a guest named Paul Flanner arrives.

At fifty-four, Paul is a successful surgeon but in the previous six months his life has unraveled into something he doesn’t recognize. Estranged from his son and recently divorced, he’s sold his practice and his home and has journeyed to this isolated coastal town in hopes of closing a painful chapter in his past, completely unaware that his life is about to change forever.

Adrienne and Paul come together as the storm gathers strength over Rodanthe, but what begins between them over the weekend will resonate throughout the rest of their lives, intertwining past and future, love and loss.

Another reason to love Firemen