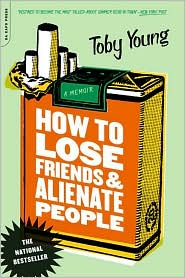 BOOK SYNOPSIS:  In 1995 high-flying British journalist Toby Young left London for New York to become a contributing editor at Vanity Fair. Other Brits had taken Manhattan–Alistair Cooke, Tina Brown, Anna Wintour–so why couldn’t he’But things didn’t quite go according to plan. Within the space of two years he was fired from Vanity Fair, banned from the most fashionable bar in the city, and couldn’t get a date for love or money. Even the local AA group wanted nothing to do with him.How to Lose Friends and Alienate People is Toby Young’s hilarious and best-selling account of the five years he spent looking for love in all the wrong places and steadily working his way down the New York food chain, from glossy magazine editor to crash-test dummy for interactive sex toys. A seditious attack on the culture of celebrity from inside the belly of the beast, How to Lose Friends and Alienate People is also a “nastily funny read.”

MOVIE SYNOPSIS:  In this hilariously funny fish-out-of-water tale, “How to Lose Friends & Alienate People” tracks the outrageous escapades of Sidney Young (Simon Pegg), a smalltime, bumbling, British celebrity journalist who is hired by an upscale magazine in New York City. In spectacular fashion Sidney enters high society and burns bridges with bosses, peers and superstars. The film is based on Toby Young’s memoir of the same name and also stars Kirsten Dunst, Danny Huston, Gillian Anderson, Megan Fox, Max Minghella and Jeff Bridges. Directed by Robert Weide, the film will be released by MGM Distribution Co. on October 3, 2008.

Patches and Buttons By Jennifer Link