Bitten and Drained the Lauren Westlake Mysteries by Dan O’Brien 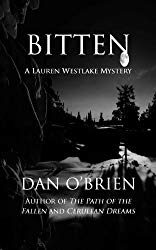 If you love supernatural fiction, a good mystery, and a fun story, then you’ll want to give Bitten a look. Releasing in July as well is the follow-up novella, Drained. The third novella in the series, Frighten, will be released in early 2019.By Dan O’Brien

Synopsis: A predator stalks a cold northern Minnesotan town. There is talk of wolves walking on two legs and attacking people in the deep woods. Lauren Westlake, resourceful and determined FBI agent, has found a connection between the strange murders in the north and a case file almost a hundred years old. Traveling to the cold north, she begins an investigation that spirals deep into the darkness of mythology and nightmares. Filled with creatures of the night and an ancient romance, the revelation of who hunts beneath the moon is more grisly than anyone could imagine.

What readers are saying about Bitten

“Bitten is an extremely well-balanced and engaging novel. It contains mystery, suspense, horror, romance, and best of all – a creative, genre-bending twist on werewolf mythology. The story is quick-paced and dark without being too heavy or overdramatic. The protagonist is a strong and courageous FBI agent who is able to assert herself without casting aside her femininity. She reminds me of Sue Grafton’s Kinsey Millhone and Janet Evanovich’s Stephanie Plum…. If a sequel follows, I will definitely read it.”

“Author Dan O’Brien left his mark with Bitten. I’ve now read three books by O’Brien, but BITTEN is by far my favorite. It not only showcases his literary skills, but leaves the reader wanting more. What else could an avid reader ask for?”

Get it today on Kindle!

Synopsis: A frightening new case. A mysterious journal. The beginning of the end. Lauren Westlake has left behind the horrors of northern Minnesota to investigate a strange package with a cryptic return address. Crossing the country to the city by the bay, Lauren discovers that Locke was only the beginning. Crossing paths with a stoic SFPD detective and a surprise from her past, she must figure out what hunts the foggy streets of San Francisco in this new novella. Is it vampires? Is it something more?

An excerpt from Drained:

THE OVERPASS that separated the yuppie, hipster youth of the city from its poorer denizens was indistinguishable from any other place in the city.

Benny squatted under the comfort of his concrete shelter to avoid the light drizzle that replaced the evening fog. His grizzled features and unkempt salt-and-pepper hair might be charming if he weren’t several shades of crazy and hungrier than a feral cat. He remembered when he could wink and say a few smooth words and a beaming waitress might swoon––regaling her with stories about his gigs around the city and the promise of a little danger.

In the late 70s Benny fancied himself a musician, playing the tall bass with a few friends; it was tough for Benny to think of them as friends now. What passed for a friend on the streets was someone who wouldn’t steal your blankets or chase you out of a rat-infested hole with a taped-together shiv made from broken bottles and pieces of fenders from stalled-out cars.

The 70s hadn’t been kind to Benny. Cocaine went from recreation to lifestyle, and then to death-style. As his other bandmates started lives, Benny spiraled deeper into despair.

His friends lost his number.

It wasn’t long before he didn’t have the money for electricity, and then he lived his life in darkness. From there, it was a short hop to not being able to pay rent; soon thereafter, the streets became his home. After enough time wandering the cold pavement, he became too volatile to bunk in the homeless shelters.

He was a creature of the streets.

Benny made a strange sort of existence for himself under the overpass. Newspapers were arranged like a well-manicured lawn. Boxes, crushed and water-damaged, were the wings of his great destitute estate. The barrel at the center of it all, burning brightly like a lighthouse upon rocky shores, was full of the wisdom of Western society: newspapers, magazines, and various novels.

Grumbling angrily and unintelligibly to himself, Benny dug through one of his grocery carts filled to the brim with postmodern junk; he was looking for a broken umbrella amidst the sea of garbage and treasure within his cart. As Benny extricated the battered object of his desire, he was startled by a voice. “I do enjoy these brief moments of gentle rain. Do you find them as soothing as I do?”

Turning, Benny was immediately irritated by the man’s presence. Dressed to the nines––with angular, symmetrical features––there was something unreal about his figure.

The man smiled. “Nor do I. But I wonder, Benny, what is it that you’re looking for?”

Benny looked at the streets and saw cars zip past between the concrete dividers that obscured his shelter from view. It was the main reason why he stayed there: it was his island, his cabin in the woods.

The man smiled again, disarmingly. “I must admit I’m a bit peckish myself. Though I have no food, at least nothing that you’d find satisfying, Benny.”

Benny was struck by the disconnected nature of their conversation, as if the man weren’t talking to him at all and instead reading from a script. This feeling became more surreal as the man stepped past him into the darkness of the overpass. His features were adulterated by the shadows there: his dark hair made darker, his gray eyes disappearing.

There, in the darkness, Benny heard something move.

“Watch out, mister, there are rats back there. I catch them sometimes and cook them up.”

The man chuckled but didn’t respond, turning his back to Benny. When he spoke again, his voice had changed; it seemed bloated and distant. “They never look for the wretches, Benny. Give me your poor. Give me your hungry. Those are just words. I’m hungry as well….”

There was no mistaking it for a rat this time.

A tremor crept across Benny, rising from his toes like acid reflux after he ate from the dumpster behind the Korean restaurant a few blocks away. “I don’t want no trouble,” repeated Benny, his voice quaking as he took a few steps back.

“You won’t have to worry about trouble any longer. I will take your fear. Feed on your fear….”

Panic gripped him, but his muscles wouldn’t respond. He wondered if the lady doctor at the center was right: Was he crazy? Was he chasing shadows in the dark?

Looking at his bin of junk, he saw the broken pipe he’d taken from a rundown building in the Tenderloin. He thought it was copper, but it turned out to be rusted and useless like him. Gripping it like he was Babe Ruth waiting at the plate, he watched the darkness. The well-dressed man had disappeared, but his voice drifted on the air like a spirit.

“Why fight it, Benny? Is this really worth living for, this sad little life?”

Gesturing with the pipe, he shouted into the dark.

The laugh sent shivers down his spine.

Something in the darkness tripped and fell, collapsing the third and fourth cardboard bedrooms of his sprawling street estate. A figure emerged in the darkness: something frightening beyond words.

“We know all about you, Benny.”

As it took shape in the half-light of the passing cars, Benny held his breath and swung the pipe as hard as he could, lurching forward as it connected with thin air. With a gnashing maw, it blotted Benny from view and pulled him back into the darkness.

If you loved Bitten (or supernatural fiction, a good mystery, and a fun story), then you’ll want to give Drained a look. The third novella in the series, Frighten, will be released in early 2019.

Get it today on Kindle!

Dan O’Brien has over 50 publications to his name––including the bestselling Bitten, which was featured on Conversations Book Club’s Top 100 novels of 2012. Before starting Amalgam Consulting, he was the senior editor and marketing director for an international magazine. You can learn more about his literary and publishing consulting business by visiting his website at: www.amalgamconsulting.com. Follow him on Twitter at @AuthorDanOBrien.