Below the Moon Book Two in The 8th Island Trilogy

An epic fantasy adventure series called The 8th Island Trilogy. Above the Star, book one, was released in 2018, featuring multigenerational and diverse characters. Books two and three—Below the Moon will hit bookshelves in OCT 2019 and Inside the Sun—  and 2020  .

Ella Wellsley is not your typical teenager. Cancer left her mute, but not powerless. Trapped in a parallel dimension, Ella rallies her strength to join her family—her mother, Tessa, her grandpa Archie, and her magical boyfriend—in locating the cure to her illness. This cure is entangled in the fate of all worlds, and threatened by the presence of an evil Star anchored in the sea. The Star has thrown life everywhere into chaos—and it is Ella who holds the key to unlocking its mystery.

Caught in a web of betrayal, mistaken identities, secrets, and love triangles, Ella, Tessa, and Archie must overcome their troubled pasts to ensure a future for all worlds. On this journey—armed with unearthly abilities and unexpected allies—each member of the Wellsley family will learn the power of love in the face of their greatest fears

Today we bring you Chapter One

Lightning illuminates the sparse room where Luggie and I stand in silence and makes all the glass buildings visible. For a moment, I can see everyone in the city. Olearons prepare the wryst drink and vulai bread in the great kitchen for our imminent journey to the Star. Inside a molded 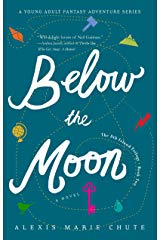 glass nursery, a red-skinned mother rocks her frightened baby. The Lord of Olearon struts around in his fanciest garb, overseeing everything but doing nothing. In contrast, Grandpa Archie and Dad dash here and there helping everyone. Olearons and humans sit at long glass tables, eating the tiny harvest, while others struggle to sleep. Then I see Mom and Captain Nate. Ugh. Their flirting is disgusting. I can’t stomach the sight of them, so I look up.
The dark sky is lit with splashes of purple, yellow, and blue as the pronged fork of
electricity lacerates the atmosphere, shattering it as if it were pottery. Through the grassy
pathways between the geometric buildings, past the warrior-training paddocks, and beyond to the western pasture, I can make out more tall slim red bodies going about their normal lives—though nothing is normal. Not for me in this new world, not for the Olearons, not for any race on the island of Jarr-Wya.
Luggie’s yellow eyes squint at me, distrustful. He shoves a tunic into a sack. Both were
given to him by the Olearons, and he accepted them begrudgingly. The tunic is for protection
from the erratic weather on Jarr-Wya. He needs it. We all do. The sun is pale like an unripepeach. It looks ill in the sky and gives little warmth. It’s easy to relate to its feeble quality. I
wonder if I’m fading away like the sun and exactly how much fight I have left in me. Luggie’s sack is to carry his belongings on our journey to Baluurwa the Doomful, where our new company hopes to find a tunnel to the hiding place of the Star. Not all of us will set out on this mission. Not the dead ones: Olen, the Maiden of Olearon, Eek, or Valarie, the cruise director, twice-killed. Luggie’s sister Nanjee wasn’t the only casualty. Luggie is painfully stubborn, just like me—though I’d never admit that to Mom. He is
almost six thousand sunsets old, which if my math is right makes him sixteen in human years. 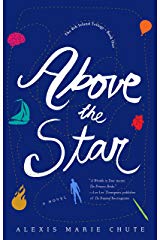 Alexis Marie Chute is an award-winning author, artist, filmmaker, curator, and inspirational speaker. Her memoir, Expecting Sunshine: A Journey of Grief, Healing, and Pregnancy After Loss, was a Kirkus Best Book of 2017 and has received many other literary awards. Expecting Sunshine is also a highly acclaimed feature documentary film produced and directed by the author. The film screened around the world in 2018 and 2019.

OMG… I Did It Again? by Talia Aikens-Nuñez