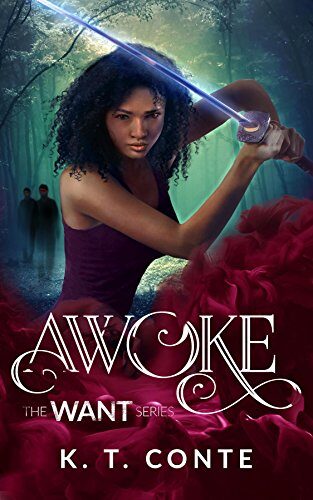 Awoke (The Want Series) is really witty and hilarious. Makes for a very quick and entertaining read and would be perfect for younger teens who like fantasy novels. The concept of a Department of Grim Reapers called Ager and monsters called Want was inventive.

Some chain of events were a bit obvious which made the book a little bit boring at times. Hence, I deducted a star for that. But, I did not expect the ending and loved the cliffhanger at the end of the book. I’m very excited to see how the author deals with the plot of this book in the next part.

“Had it not been for my nails cutting into my palms, I’m pretty sure I would have passed out. Again”

I thought it was a little obvious that General Lamar was the bad guy. I saw it coming as soon as he was portrayed to be just like Katya’s father.

Also, I loved all the conversations Katya had with Mika and Cynthia had inside her mind. I really didn’t expect Cynthia to be her but I really liked it nonetheless. I really hope Mika comes back in the next book.

The overall plot involving the “new Master” and the archangels is gripping. Not much has been developed regarding this plot line, but I have high hopes for the next book.

“the “new Master” watched from inside the rift and sent enough ripples through it that we couldn’t help but tremble from the dark energy that moved around us.”

It sets a nice pace for the entire Want series.

Katya leads a normal life any teenager would be envious of – popular, pretty and dating the high school elite. Not she enjoys the spotlight, mind you. She wants everyone to believe she is normal.

But when Katya sees the real reason behind the earthquakes plaguing everyone in Boston, the truth rattles and shatters the perfect normal illusion Katya created for herself. An ability to see unearthly creatures and manipulate waves of life energy labels her as anything but normal. And it’s an ability that attracts unwanted and dangerous attention.

She reluctantly finds herself in the company of Gregor, a handsome member of

an international spirit military team called the Kyrios. Her simple decision to help thrusts Katya in a world of the undead spirits, betrayal and a perpetual battle between undead monsters and the wardens that keep them in their place.

Katya must decide whether she values the simple and easy life she created for herself over the complex and difficult world now asking her to stand and fight.

K.T. Conte is a lover of books, people and all things wild and crazy. She received her B.A. in English from Boston College and her law degree from Suffolk University Law School. While she has and continues to be a licensed attorney, her first love has always been books from the tender age of 2. Originally from Massachusetts, K.T. currently lives in New York City with the monsters in the closet, her husband Everett, a couple of building fairies and her dog, Champ.

Guest post by  K.T. Conte
Black Girls can be the Mother of Dragons tooI don’t know about you but I love Mhysa. Sorry, my geek is showing – let me start over.I love Game of Thrones. There are so many great characters in the hit HBO show (yes I know it’s a book but I’m focusing on the show). My particular favorite is Daenerys Targaryen. If you know the show, perhaps she’s a favorite of yours too. If you aren’t – come join us on the other side. You know you’ll like it…But all jokes aside, Dany is considered a fierce and beguiling leader who has continuously been treated differently because she is a woman. And time and time again, she surprises her adversaries, both men and women, about how calculating and powerful she can be using her skills. It’s always liberating to see this and not be thrilled she surpasses expectations.Let me start by saying this is NOT a slight on Dany. Remember, she is my favorite. However, what I continue to see throughout the show is the lack of people of color in leadership roles. We can easily point to two people: Dany’s lead general Grey Worm and Missandei her advisor. But even that, they are subservient to Dany.

It makes me think of the question: Why can’t a black girl be the Mother of Dragons?

I, for one, am a self-proclaimed black girl nerd. Have been one all my life. I have devoured books about magic, dragons, knights, princesses, bad ass fighters and the like. And it pains me to think back and not remember one protagonist that featured a black female in the forefront.

It was one of the reasons that I purposely wanted to put my main character, Katya on the cover of my book. She is strong black female character sporting an intimidating stance with a sword in hand ready to strike. And I can tell you it already has resonated with many girls within the black girl nerd community (yes, there is one).

It may take a while for this genre to represent the readers that love it without question, I will do my part and help out the sci-fi/fantasy community by putting out more books with more leading black female characters along with an international cast of characters supporting her.

Because a black girl can DEFINITELY be the Mother of Dragons. And it will be my greatest achievement to make that a reality.

Nanny and Me : by Florence Ann Romano… How to find the best Nanny

The Steel Sentinel by Kyle Williams